I am living proof that reliance on assumptions can make one look pretty foolish.

Sunday was a day full of Less Than Fun Activities - eight hours in a S.T.O.P. class (a traffic safety course for those of us who get speeding tickets in Nebraska), the beginnings of a snow storm that has effectively shut down UNL's campus on its first day of the new semester, and hours of thirst, grumpiness,  frequent bathroom stops, and tooth sweaters coupled with a general feeling of mouth stickiness.

It began in the morning as I settled into one of the plastic folding chairs in the classroom, when I felt the familiar double vibration of Jim letting me know I was flying past my high alert of 160 mg/dL.  Huh...  well, okay.  That could be from my coffee creamer.  I took a correction bolus, another sip of coffee, and made the decision to disable my high and low alarms until the class was over - I didn't want the attention a vibrating handheld electronic device would surely bring.

Checking my CGM periodically throughout the morning, I seemed to level out around 230.  Lame!, I thought.  Another correction.  Another sip of coffee.

A lunch break gave me the chance to do an actual blood test, and it showed 245.  The insulin in my pump cartridge was new, and my pump site had looked unscathed earlier that morning.  To me, the only logical place I could lay blame was the apparent stress of watching traffic safety videos from 1995 (I forgot about how huge cell phones were then).  I told my pump about the 245, the Arby's I was having for lunch, and my Ping did it's thing.  (Question:  did it also sing?  Answer:  Yes, and it wore bling.  Can you imagine such a thing?  Done rhyming now.)


Why I couldn't yet connect the dots, I'm not sure; I continued above 200 for the rest of the afternoon.  A dip here, a rise there - but fairly consistent.  After class ended, I thought some walking might help things, and spent a half hour at the nearby shopping center.  Walking always makes me drop.  (Walking around NYC = Insulin, you know.)  And yet, this time, it didn't.

Fast forward to dinner:  I excused myself and procured a bathroom stall in which to do some diabetes-related investigating.  And, lo and behold, my problem was as evident as it was gross: 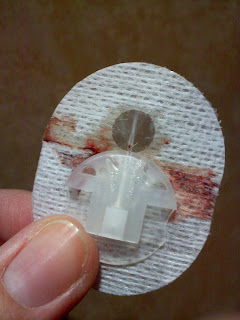 Okay, that was dumb.  Why didn't I check it earlier?  Whatever - I'll rip it out (and obviously also take a picture, while I'm at it) and put a new one in.  Which would have been a brilliant plan, except that this happened to be the first time I didn't have a back-up infusion site in my purse.

You've got to be kidding me!  Purse contents were being shuffled, then thrown.  I found the timing incredibly frustrating - I don't get clogged pump sites often, and the one time I don't have an extra site with me is now, when I'm standing in the bathroom of my favorite Mexican restaurant?

My one victory was that I did have a Humalog pen along for the ride, so dinner was spent without wearing an insulin pump.  (Which was way, way weird.) 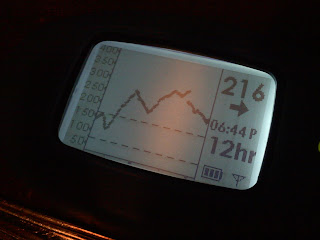 Was it a series of stupid mistakes?  Sure it was, with the benefit of hindsight.  But, I've decided to not get upset about or dwell on this.  It's true that simply checking my pump site earlier than I did would have been a good idea.  It's also true that ensuring I had reinforcements (say, another infusion set) before leaving the house that morning would have been prudent.  It's also irritatingly true that sacrificing my own health for other people's silence was a regrettable choice.

But, what's done is done.  My kidneys got an unintended workout, and I'm moving on.

Tomorrow can always be better.
Posted by Kim