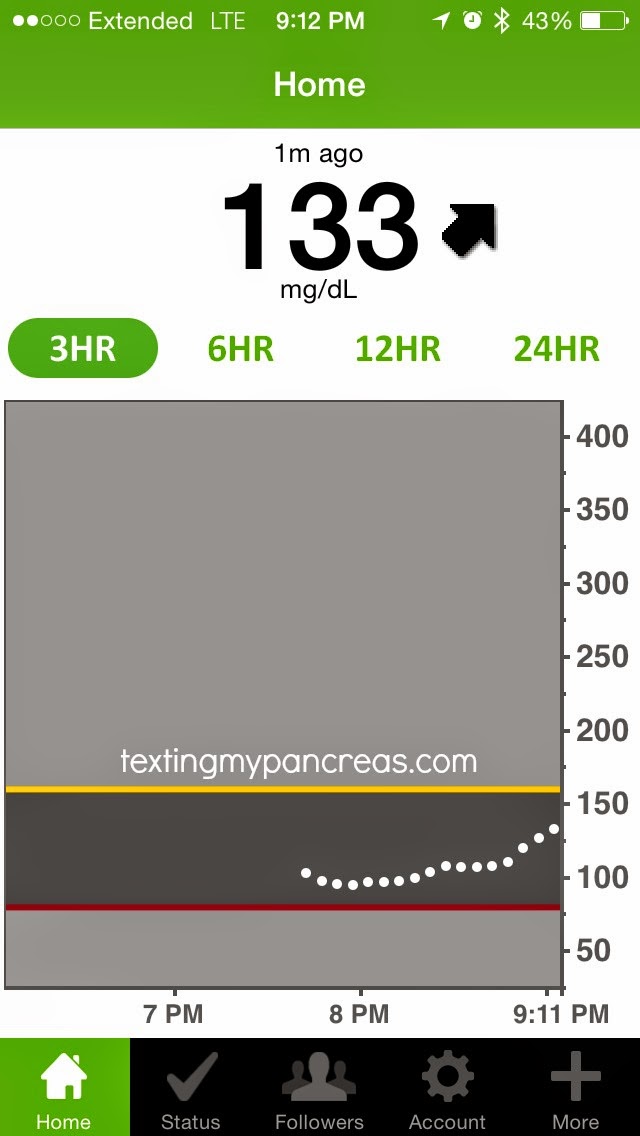 You know that thing where you start a new job and you also have a toddler and you just aren't making time to blog much anymore because any free time you have, you don't want to spend in front of a computer? That! That thing!

And also the thing were you find a free dress pattern linked on Pinterest and you get addicted to making the same dress over and over for said toddler, and do that instead of blogging? Also that thing!

For a change of pace, I thought I'd check in here and share (insert cymbal crash here) an update of sorts. I've been using the Dexcom Share receiver and corresponding Share2 app on my iPhone for the past couple of weeks. (If you don't know what any of those things are, that's okay - here's where you can get up to speed.)

Let me back up a bit. I've been using some version of the Dexcom CGM since 2009 (holler, Seven Plus) and the information, education, and confidence that this technology gives me is incredible. (Super serious side note: has anyone else seen the Sesame Street video with Adam Sandler? Every time I see the word "incredible" now, I think "incredib-ELMO!" #toddlerlife) But seriously... if I had to pick between a CGM or an insulin pump, I'd pick CGM every time. More data about what my BGs are doing equals less risk for me when it comes to sleep, exercise, alcohol, uncharted food adventures... everything that's part of living a LIFE is on the list, so this little device has become pretty important to me.

Which makes it even more baffling that for the past... a long time... I haven't been on top of my diabetes management game. I've been wearing my insulin pump, but I'm not making the incremental adjustments to basal rates on my own in between endo appointments, like I'd done in the past. I hadn't been testing more than a couple of times a day, even though I had all of the equipment with which to do that a lot more often. And even though I still wear my CGM constantly, I haven't been checking the receiver as frequently as I historically have. I was finding myself going through a whole morning at work and realizing once I left for lunch that my receiver had been in my purse, untouched, for that whole time.

So when the word came out that Dexcom's bluetooth-enabled receiver (which corresponds with an iPhone app) had been FDA-approved, I placed an order. Maybe a change of "scenery" would help. And even though I wouldn't be using its namesake feature - actually sharing my CGM data with other people, through the Follow app - I thought I might find value in the ability to check my BG from my phone, because how cool is that, and I am absolutely a fan of any little incremental improvement that makes me feel better about doing something I hate.

The novelty works for me.

(I'll put the thought in there that I'm aware of the wonderful work and awesome resource that is Nightscout - that rig/system/thing isn't as good of a fit for me right now, but I am so, so thankful for the hard work that's happening there.)

But you know what I just discovered today after a co-worker showed me what she was tracking with the Health app, and it got my brain ticking? The Dexcom Share2 app can share data with the iPhone Health app.

Which means I can see multiple days, weeks, or months worth of Dexcom data in one tap.

Dexcom Share data feeding into my iPhone's Health app. I like being able to see more than 24 hours of data at a time! #diabetes
A photo posted by Kim (@textingmypancreas) on Mar 31, 2015 at 2:08pm PDT


Here's what I had to start with, and here's how I got it to "go". I don't work for Dexcom (my disclaimer policy as it relates to Dexcom is here), so I don't really know which of these things is required and which isn't, so I'm just going to tell you everything and hopefully it works for you. I also couldn't find any information on Dexcom's website on how to do this sync, which I think is totally weird, so in the interest of collective knowledge I'll share what I did here. I'm calling this tutorial Montell Jordan because ::sings:: THIS IS HOW WE DO IT.

What I already had: The Dexcom G4 continuous glucose monitoring system with the adult version of the Share receiver (there's a pediatric version, and I can't confirm how/if this still works with that one), the Dexcom Share2 app, an iPhone with the Health app installed and bluetooth enabled, and a sandwich.

What you don't actually need: The sandwich, unless you're hungry and then you should totally get a sandwich.

What I did: I installed the Share2 app on my phone a couple of weeks ago, so that was already all synced up. 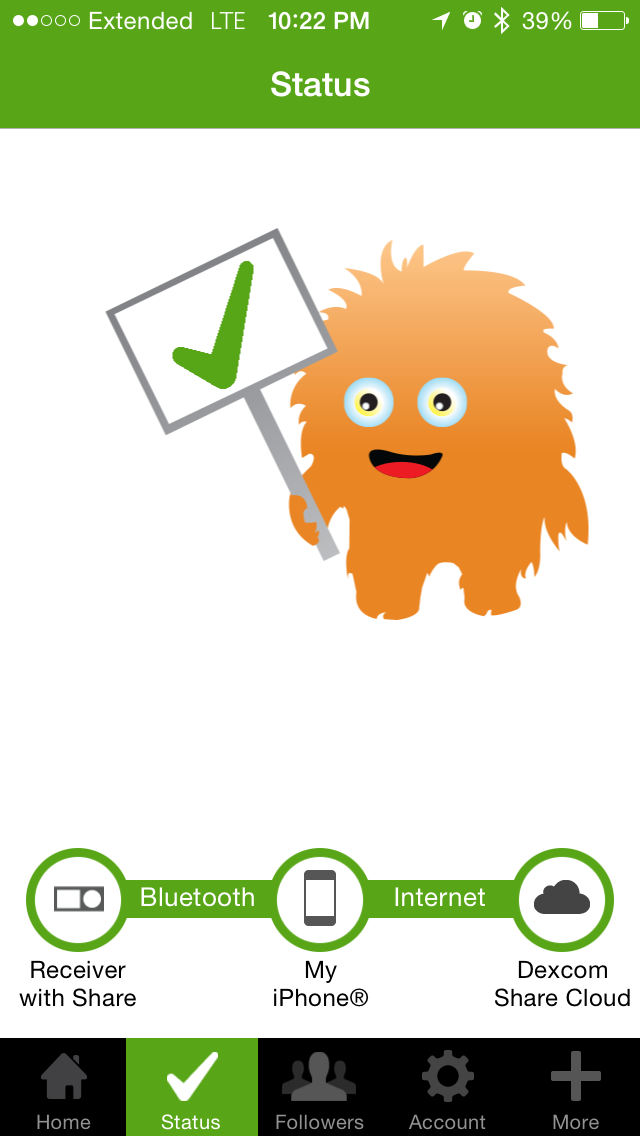 I went into the Health app, and if I'm remembering my steps right (it all happened so fast!) I tapped "Health Data", then "All", then "Blood Glucose". At some point I also was in the "Sources" tab on the bottom and Dexcom was a choice I could select. Then I chose "Allow Dexcom to Write Data". I really have no memory of the order in which I did these steps - this is why I'm not a technology writer, you guys.

I also added it to my dashboard within the Health app on this screen: 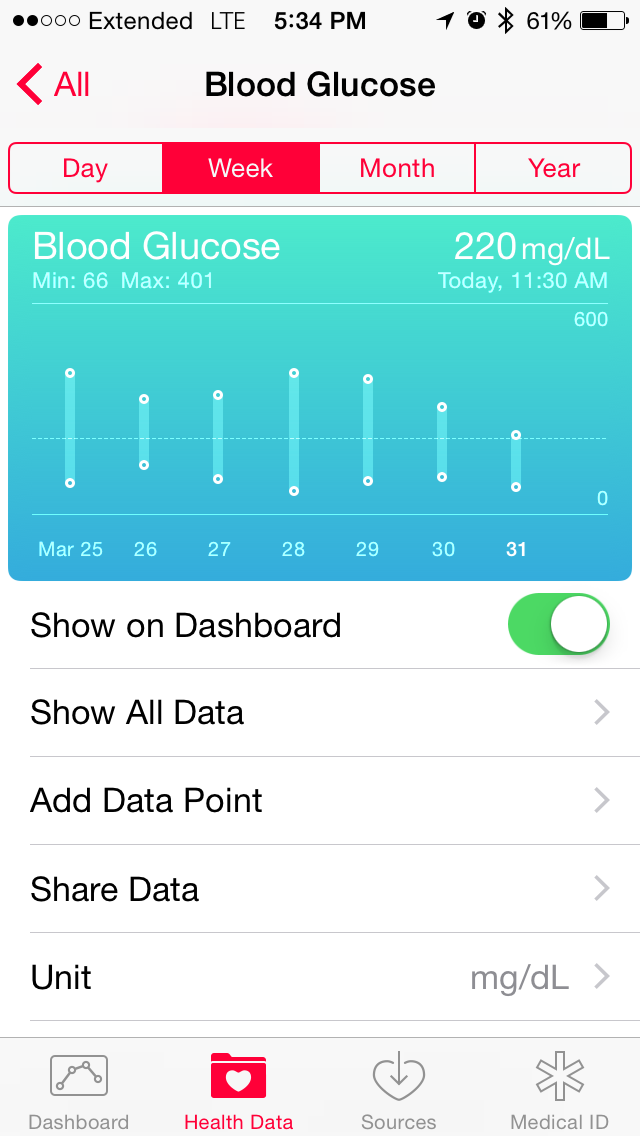 And discovered that you can look at every reading your Dexcom Share receiver is recording: 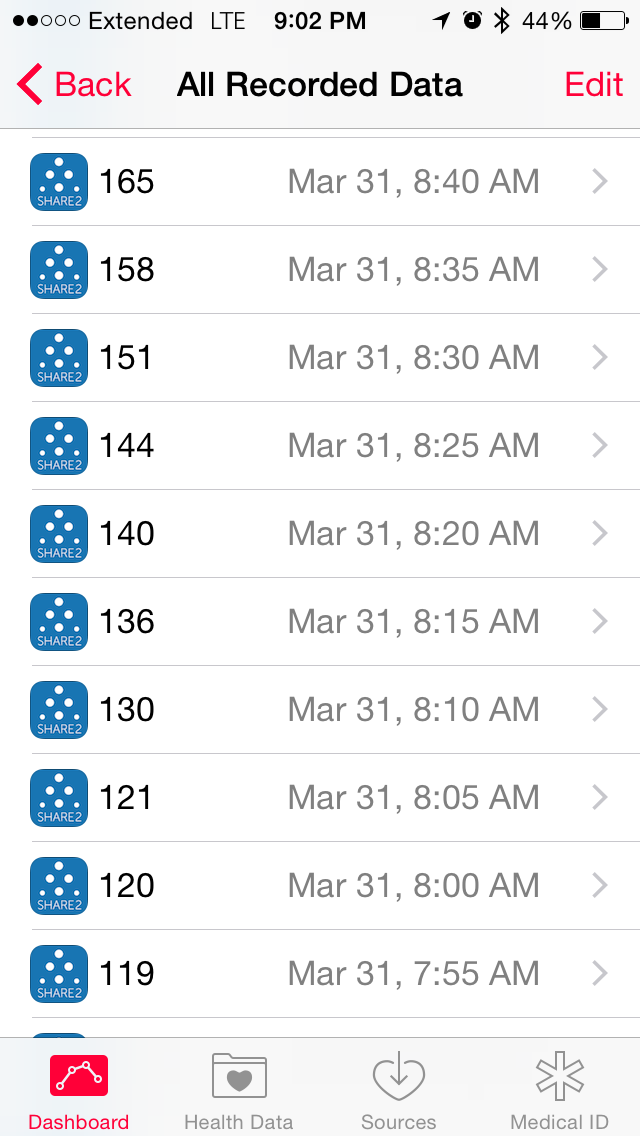 And if you figure out the right order of steps and want to share them below in the comments, that would be - wait for it - incredib-ELMO.

UPDATE: From reader Chris: "The missing steps: In the Share 2 app, go to "Account" and then click on "Health". This will take you to a screen where you can enable the Health app to access Dexcom data. After enabling, the data will appear in the Health app as you describe."