I seem to have this way of doing things that many don't share - a habit, you might say.

Of the people I know who use an insulin pump, most use something like this to set up their infusion sites:

It's a pod thing that automatically inserts the cannula for you - click a button, and the pod does the work, like some sort of magician. I actually have no idea how they work, because... ready for this? I've never used one.

Yep. I'm a manual inserter of insulin pump sites. I was brought up, so to speak, on these: 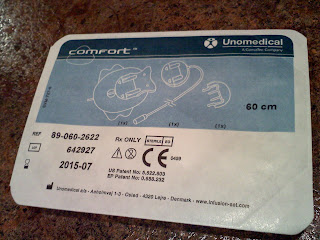 That's what I was taught to use with my first insulin pump in 2005 - which was the good ol' Cozmo. When I switched to the Ping a year ago, they told me that I could stick with what I'd been using, and so I did. I figured that since I'd never had any issues with them in those four years - why mess with a good thing? 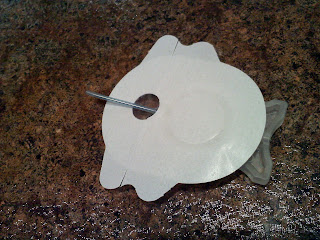 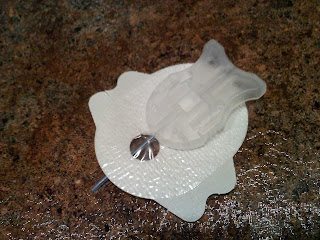 The whole idea of using an automatic inserter freaks me out a little bit. (Shouldn't it be the other way around - shouldn't I be freaked out by having to do stick the needle in myself?) I like the idea that I'm in control of exactly when and at what speed that needle comes at me, and I can angle it in whatever way I choose. It does have drawbacks, though - I've never tried an arm site, because it's nearly impossible to do all of the unpeeling of tape backing (while not accidentally removing the cannula) when you're working with one hand only.

Maybe some day I'll work up the courage to try one - but I guess I'm not there yet.
Posted by Kim