Make Sense, It Does Not.

There's a monstrosity of mostly-carnivorous celebration once a year nearby, named "Ribfest". As the name would suggest, there's a lot of food to be tried - ribs, pork, brisket, and just anything you can name On A Stick. Midwestern sterotyping at it's finest. 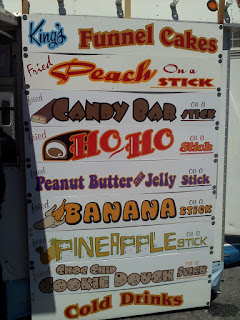 Aaron and I headed there for lunch on Sunday, and investigated several options before landing on a 1/3 slab of ribs and a pulled pork sandwich to share between us. Afterwards, we thought we'd give the funnel cake a go. (Okay, the funnel cake was mostly for me - Aaron got the cookie dough on a stick. Neither disappointed our 'This Is So Totally Bad For Me' tooth.) 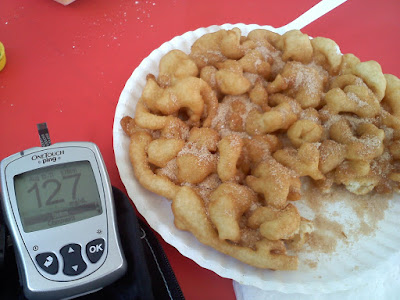 Seeing as how the composition of a funnel cake is much like a donut - mostly fat and sugar - I expected significant CGM graph shenanigans for the next several hours. I tested; I bolused; I ate; I waited for the rocket launch.

Except that it never came.

Somehow the magical combination of walking, sunshine, mega-bolus, and luck meant that I never left the 105 - 135 range. Success!

Later that day, we had sweet corn for dinner. Just sweet corn - we weren't that hungry, and a stop at a roadside farmer's stand meant we'll be eating fresh, locally grown veggies all week. (Yay!)

I guessed 30g of carb for two ears, based on the Ping remote's food listings of "corn on cob wht - 13" and "corn on cob yell - 25". (They were speckled with both.) It wasn't until ten or so minutes after eating that I heard Jim vibrating from the kitchen counter.

"HIGH - 180". My CGM was currently reading me at 226, and I stayed above 200 for the next few hours, despite the two correction boluses I threw at it.

So let's get this straight - a funnel cake keeps me in range, but sweet corn sends me to the moon?

I'm not sure even Yoda could explain this one, but I'd sure like to hear him try. 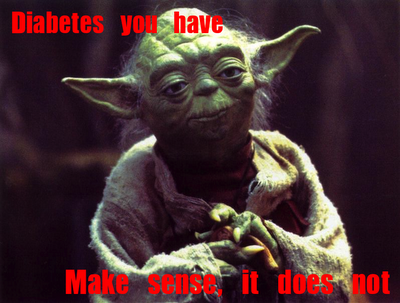