It Was A Ruff Walk.

So, we've got this dog, right? 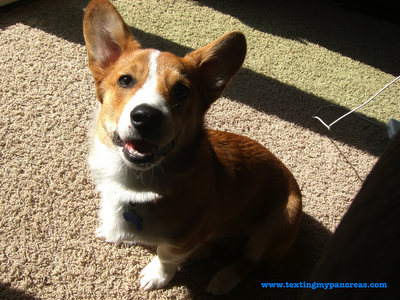 Like good doggie parents, Aaron and I have been trying to get in the habit of taking him for a walk as often as possible. Which, as you may guess by the shenanigans I mentioned in yesterday's post, didn't really happen this weekend.

Last night as I left work, I thought, This is it! I'll make it up to him! Billy Corgin and I will go on such a long walk that he won't even know what hit him!

Instead - I was the one who got hit with something.

I had packed up my CGM receiver, phone, glucose tabs, lip balm, and plastic bags in my not-a-fanny-pack-dang-it, filled up a thermos with water, coaxed him into his harness and leash, and off we went.

With a pre-sweatbetes blood test of 84, and a Juicy Juice and Nutrigrain bar freshly deposited into my bloodstream, I felt confident that this walk would be epic. I would get through this without a low. Billy and I would stay hydrated. I would do that polite head nod thing to our fellow pedestrians, and Billy would happily wag his tongue at them, and we'd get our workout on like normal people. 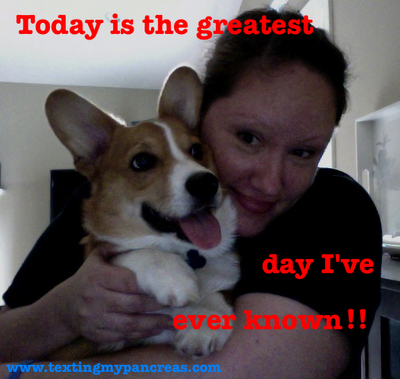 You may have guessed where this is headed.

First, he was a poop factory, and I ran out of plastic bags. (Sorry, neighbor on the other side of the 'hood - I'll bring more bags next time.)

Then, he'd start pulling away from me (like he needed to do his thing), but instead he'd just plop down in the grass to take a breather. "No, dude, keep walkin'. We aren't even halfway yet." And so I'd tug, and he wouldn't put his legs out under him until the last second (the last second being the one before he hit pavement). It felt like dragging a pancake on a string around. I felt like a horrible dog mom, certain that the driver of each passing car was mentally chastising me and my unsophisticated canine motivating skills.

When we had reached our halfway point at about the 30 minute mark, we both took a water break. I had noticed that my legs were feeling a little bit noodley, and took a gander at my CGM.

Say it with me: Nooooooo... 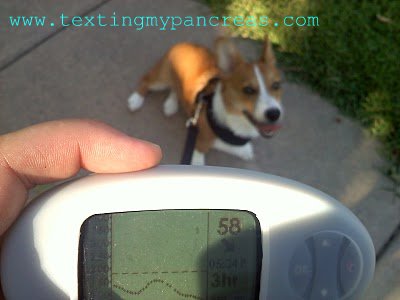 I was lucky that little William was content to sit in the shade while I shoved my face with glucose tabs recovered.

And when we finally got going again, but I still didn't feel great, he seemed to know that it was now his turn to be the motivator amongst us.


He's a good pupster, that Billy Corgin. He's a keeper.