I'm setting the snarky humor aside on this one.  (Well, most of it.)

This wasn't an easy post for me to write, and I've been going back and forth for a while about whether or not I want to share this part of my personal history.  I've also spent several days writing and rewriting this story, as I want to make sure to tell it the "right way".  Some part of me, the part that won this internal debate, feels that this story needs to be told - because I hope that sharing it might help someone else.  And, unfortunately for me, the story needs visual aides.  You've been warned.

Aside from type 1 diabetes, I also have hypothyroidism.  It's another auto-immune condition, and it essentially means that my thyroid gland is not making enough of the thyroid hormone.  It is fairly common in women, and is also common in those with type 1 diabetes (as it seems a diagnosis of one auto-immune condition makes it more likely that you'll have another).  It's usually no big deal (compared to diabetes, I guess) if you catch it in a timely manner.  You show a few symptoms, they prescribe you some Synthroid, and you're golden again.

Unfortunately, "no big deal" wasn't the case for me.  It took a significant toll on my physical and emotional well-being, and I can say with reasonable certainty that it caused me to become a totally different person for a few years.  It felt like I didn't even know the person I had always been.

I was diagnosed sometime in 2003, and I'm reasonably certain that my thyroid had started to slack off long before then - years before.

Here's why I'm reasonably certain of that.

Aside from the whole diabetes thing, I was a healthy person up through college.  See?  Here I am in high school - actually, this picture was taken at diabetes camp, the last year I went.  I had permed hair.  (It was the early 90's.  Don't judge.)  I did cheerleading.  I took Tae Kwon Do (I wasn't kidding about that black belt).  I tried some ice skating lessons, as well as a good decade of dance classes.  I was a happy, active, and optimistic person, much as I am now.


I went off to college out-of-state, and things began to change.  My mom has described it as "sending me off to college one person, and returning from the first year as someone completely different".

Case in point: here I am, junior year of college.

Aside from my gothy transformation, you can tell that my skin had lost some color.  I also gained weight, but I attributed that to different eating habits and less exercise (as I was then living on my own, several hundred miles from the parents who had encouraged those good habits).  I never felt like I got enough sleep, and I would frequently miss my morning classes (which, again, is "typical college behavior", and so I didn't think much of it).  And here I am, about a year after that - notice that my skin is even paler, which hardly seems possible, and even my eyebrows have thinned out. 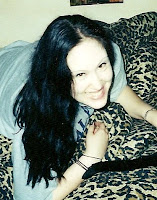 Aside from the physical manifestations of undiagnosed hypothyroidism (which for me were thinning hair, paler skin, relentless exhaustion, feeling cold all of the time, and weight gain)﻿, it also had a significant impact on my mental health.  I dealt with a great deal of depression back then - some of it diabetes-related, and some of it not.  The smiles in both of these pictures are misleading, as I never truly felt happy during those years in my life.  Moments of contentment existed, but in between those times, I felt lost.  I felt trapped in my own life, and wasn't sure I could do it anymore - or that I wanted to.

I did things during that time of my life that I wouldn't have ever done previously, and I wouldn't ever do again.  I know that college is a time for stupid decisions, but it was more than that.  The worst part may be that I never thought anything was wrong with me.  I knew I was a changed person, but I felt that was because the realities of life had finally settled on me, and this was how I was intended to exist.

One thing I always did, as a child and up through my teens, was to express myself through journaling and art.  I recently found some of that stuff from my college days, and even I can't believe some of what I wrote and drew.  (The picture below is the most tame one I could find.)  If I could time-travel myself back and give myself a reassuring hug, I would.  It all turned out okay, but it was hard to see back then that it ever could be.  Instead, I drew things like this:


The aforementioned "stupid decisions" included things like dropping out of college (I went back and finished later on), and moving from Nebraska to Connecticut to go live with a dude I met on the internet (I eventually realized how dumb that was, and moved back).  Stupid decisions also involved hurting myself physically in ways I won't share here and would rather forget, but I can say that there are still marks on my arm to remind me. I can very vividly recall the night my mom noticed what I had done. Watching my mother's heart break right in front of me is something I won't ever forget, and I unfortunately can never take back.

The happy news is that I finally did "come back".  Getting my thryoid levels straightened out with the proper Synthroid dosage (and subsequently adding in Cytomel, too) got me back to feeling like myself; and the support of my parents, who never gave up on me even when it would have been so easy to, helped me to come out the other side.

Why my hypothyroidism wasn't caught early on, I'm not sure.  It's a big part of the reason I refuse to see one of the endocrinologists in town - I was under their care as this change took place.  It took an endocrinologist in Connecticut to get an accurate diagnosis.

That diagnosis was a tough one for me.  I was already struggling with the idea of a lifetime of diabetes (even though I'd already been at it for 17 years), and having to add "pills you'll take every day for the rest of your life" didn't go over well.  It upset me that another one of my organs was giving up.  First my pancreas, then my thyroid gland... what else was next?  It felt like I was falling apart.

But, like most things, the body and mind adjust to the "new normal".  And I learned a lot of things:
The good I can see from living through this situation is the ability to empathize with and help others who are going through tough times, depression, etc.  It's a large part of what I do when I respond to Online Diabetes Support Team questions, and it's a topic that catches my eye on diabetes discussion boards.

I also learned that you're never alone.  Sometimes you're just looking in the wrong places for help.