Medicine X: A Stretching Of The Mind.

The more time that goes by after Medicine X, the more unsure I become of what I want to say about it.

Nothing seems adequate to explain the transition from my full-scale freakout two days before traveling (there may have been a miscommunication about how many nights I was allowed to stay at the hotel, and it may have been the last thing in a long line of "things", and it may have resulted in me crying - not the dainty sort of tears, but an ugly cry that I locked myself in a restroom stall at work to deal with, and that completely freaked me out because I have never reacted to anything so dramatically and uncontrollably before, but now this tangent has gotten really long, so let's get back to task here) to the unreal feeling of being a guest on Stanford's campus and getting to be a part of this amazing and unique experience, to the growing feeling that I actually began to feel comfortable among the crowd, to the realization that there is so much more to know (about patient advocacy, about healthcare, and about how the two merge) than I can ever hope to grasp, but I'll be damned if I don't keep trying to do just exactly that.

It was exhilarating and exhausting and mind-stretching, and I feel so humbled and honored to have been able to be a part of it.

Some of the most moving moments of the conference, for me, happened during the "Ignite talks" - the young arthritis patient whose doctors dismissed her as a hypochondriac; the widow whose experiences with her husband's health care has driven her to be a voice for humanizing the patient experience; the man whose isolating personal experience with Crohn's disease drove him to build an online community for his fellow patients. (You'll find more and more of these talks uploaded to the Medicine X website as the videos are edited.)

But the magic was not just in what we heard and what we learned, but in what we could discuss. Medicine X brought together patients, researchers, designers, entrepreneurs, healthcare providers, students, and technologists. We had the opportunity to interact with each other face-to-face; to bounce ideas off of each other (I may have, in a wild moment of bravery, approached one of the guys behind the iBGStar meter and pitched him my idea for the kind of CGM-like sensor I'd like to see: one that can monitor more than just our interstitial glucose, but the factors that cause the fluctuations: blood pressure, heart rate, white blood cell count, exhaustion, hormones - and wouldn't you know, he actually seemed to take me seriously); to see, as patients, the human faces behind the often seemingly monolithic forces behind healthcare. 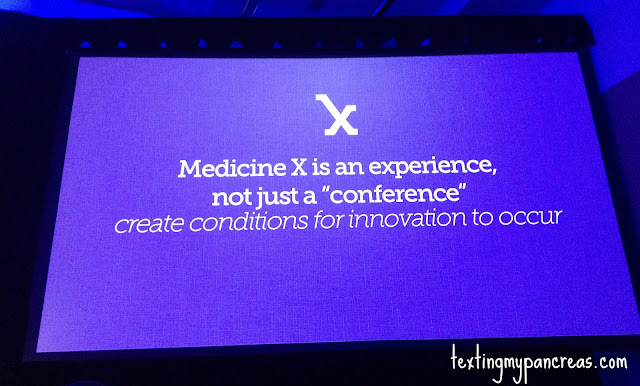 Speakers on Day 1 helped me become more familiar with terms like participatory medicine and self-tracking, and shared refreshing thoughts such as the belief that "the best way to design useful tools is to notice and respect what people are already juggling in their lives." (Quote from Susannah Fox.) Having not had much experience as a hospital patient myself, presenters such as Dr. Roni Zeiger and architect/designer Michael Graves opened my eyes to what is, and what can be.

...and this is where I stopped writing last night at 11:30pm, because I was so tired and really wanted to get to sleep. I figured I had said what I needed to say for the night, and I’d pick up where I left off later on.

As the clock turned to 1:36am, I savored the last bits of a dream. Actually I didn’t realize it was a dream until a few seconds later, when I woke sharply out of it. I had been watching a very well-produced video that had moved me deeply, and then I had copied the link and pasted it into the blog post I was working on (which was this post). Except I didn’t actually do any of that, as I was startled awake by a low blood sugar.

I lay motionless for around ten seconds, combing through what had just happened. I had hit ‘save’, right? Well, yes I had - but that was in the dream. The video didn’t actually exist, and the longer I laid there, the less I would be able to recall about why I thought it was so poignantly brilliant. I knew it ended with two people walking down a sidewalk, holding hands - I think my brain had made that to represent the patient and the healthcare provider joining each other on the road to "better".

I pushed myself upright somehow; little strength available to me at that point. It was one of those completely disorienting lows that left me with little in the way of logic, balance, or rational thinking. The hallway bounced me around as I attempted to walk through it, or was that not real either? I ended up in the kitchen and drained my first juice box, while simultaneously pawing around for a notebook; a scrap of paper; anything. I desperately needed to get down in words the epiphany I had just had in my dream.

Here’s what I got out:

﻿ ﻿
I'm keeping this really long intermission in this post because I want to help you (and when I say "you", I'm referring to anyone who may read this that designs, researches, studies, or otherwise is involved in healthcare) remember how a chronic condition like type 1 diabetes can impact every single bit of a patient's life. It disrupts our sleep; it can weaken us during the very moments in which we wish to be strong; it never leaves the equation of our daily lives. Many of us may flourish, but it is nearly never with ease. But even so, we are strong - partly because we are compelled to be, and partly because we have to be to survive. Our narratives can move and change and inspire, and that is why we must share them. We cannot expect designers to be able to develop these "useful tools" for us if we don't share with them why and how they need to fit into our lives.

So what have I taken away from Medicine X? I think that answer will continue to evolve over the next few months. Seeing and hearing from patients in other pockets of chronic illness (meaning, outside of diabetes) helps me both appreciate and empathize how far healthcare has come, but also where it needs to go.

The best part of that last conclusion is that we, the patient advocates, are gaining an increasingly influential role in how that future is shaped. We have an obligation and a right to speak up. We must.