I put in my last (?) Dexcom sensor two weeks ago. I did it a little ceremoniously, assuming that it would be the final one of the Seven Plus variety, as I had placed an order for the G4 after finding out that my insurance plan will cover the majority of the cost (a fact I'm very, very thankful for).

Last night, I got the following in my inbox: 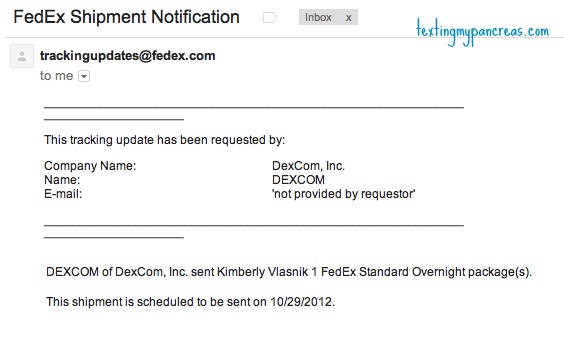 Happy Snoopy Dancing aside, I think my sensor must have sensed the foreboding in the air as it got more and more wonky (technical term) as the day drug on. Wonky to the MAX. The kind of wonky that caused me to waaaaaay under-bolus for my nacho dinner. Evidence:


Anytime you want to get here, G4, I'm welcoming you and your better accuracy-having self with wide open arms. I'm also wondering if I'll wearing both the Seven Plus and the G4 simultaneously for a while.

UPDATE: My G4 was originally scheduled to arrive Wednesday, but after checking the tracking ID, the G4 is on the delivery truck RIGHT NOW. (!!!!!)
Posted by Kim