If you follow people with diabetes on social media, it's likely you've noticed a flurry of excitement surrounding the new Dexcom G4 Platinum continuous glucose monitoring system. It's slimmer, it's more accurate, and it makes the Seven Plus system seem like the Tommy Lee Jones of this CGM family. Type 1 diabetes, especially, requires that we make hundreds of decisions and judgement calls each day about how to care for ourselves, and wearing a device like a CGM helps us make those decisions in a more informed way. If finger sticks can be considered still photographs, a continuous glucose monitor is our live-streamed video. It may still have some buffering issues, but some data is better than none.

I've watched this week's conversation arc of "I want this so bad!" to "On hold with Dexcom now" to "It's how much?", sometimes progress to "I'm approved! It ships in a few weeks!". (I called Dexcom on Monday morning and heard back Wednesday afternoon - pending my doctor's approval, all systems are GO.) With so many upgrading to the new system, I'm now wondering - what will we do with the old ones?

I mean, has anyone stopped to consider good ol' Seven's feelings about this? It seems like someone could write a whole new version of the Toy Story movies, with characters like Jessie swapped out for a Dexcom receiver. (So, Device Story?) 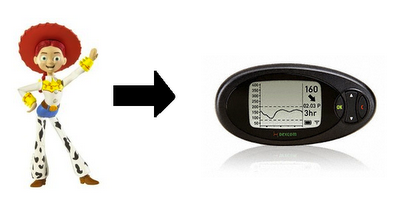 Once a precious and valued member in our collection of medical devices, Seven will be ousted by Platinum (Platty? Plato? I'm still working it out) and suddenly, he's no longer needed. He'll have to watch from a drawer, shelf, or cabinet as we discover, with wild fascination and anticipation, why our new "toy" is so much better. He'll collect dust. He'll think back on the "good ol' days" when he so proudly alerted you to the times you were under 80, and then 81, but hang on you're 78, scratch that you're 82, and now you're 75. He'll regret the times he became confused and couldn't tell you anything useful. He'll be happy for you and the joy your G4 brings you, but inside, he'll be so disappointed that your joy was found elsewhere.

Maybe my Seven needs a proper send-off to honor his service. Should I release doves? Recite a poem? Take it out once last time and buy it a shot of whiskey?

Or maybe I'll keep him on standby - just in case.