For the last several months, I've noticed an occasional floater in my field of vision. It isn't always there, nor is it always there in any particular situation. 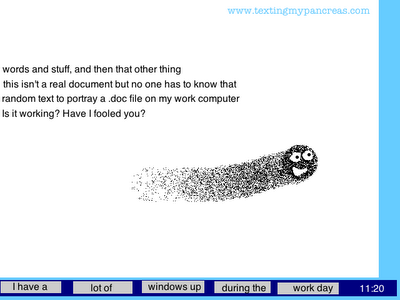 
* * * * *
The winner of this week's Hope Paige Medical giveaway is....
Life as an Empty Nester!
Please send an email to textingmypancreas (at) gmail (dot) com with your name, phone number and email, so I can get you in contact with Hope Paige Medical!
Thanks to everyone who entered the giveaway - we'll do this again in two weeks.
(Comments were numbered chronologically, and I used random.org; a random number generator; to determine the winning number.)

Labels: doctor
Email ThisBlogThis!Share to TwitterShare to FacebookShare to Pinterest