Sometimes it takes me a bit to see the dotted lines connecting my blood sugar to the one specific thing that has caused it this time. With so many variables, there's a mental checklist I go through when I see a graph like this (after I indulge myself with a couple seconds of feeling deflated): 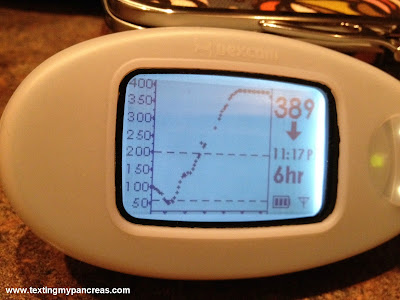 I decided to give my day-old infusion site a looksie, and as it turns out, it had been collecting something.

Not one to enable a hoarder, I ripped the site off and slapped a new one on. I did a quick check to make sure that CGM graph was right, and it was in the ballpark: 317, according to the Verio. I puffed my cheeks in frustration, trying to do that very specific kind of not-really-math where you go, "Okay, I bolused X half an hour ago, but Y probably leaked out when I pulled the site, so I guess I'll do a correction bolus of Z and hope that's somewhere near close enough".

One more gross picture of that infusion site? Okay, here you go. 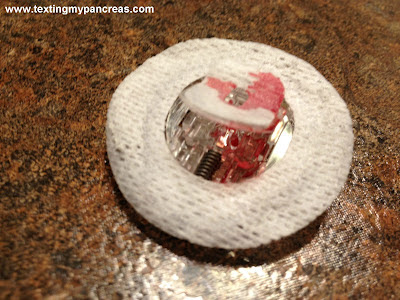 Note: if you're wondering what sort of infusion set this is, it's made by Spring Diabetes. They were kind enough to send me some free samples, which I'm trying out for a couple of weeks before I form a solid opinion on them. Don't let the blood and guts deter you - any infusion site has the ability to hit a blood vessel, yaknow? User error!
Posted by Kim