What made JDRF's Government Day event so memorable?

Dude, where do I even start with this? 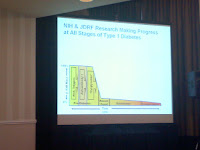 I want to start with the end - our meetings with our state's Senators and Representatives. But before I get to those, I should tell you about some of the informational sessions we had with JDRF staff and researchers.

The JDRF Government Relations (GR) staff in D.C. did a great job of giving us the information we needed to be able to talk to our members of Congress. We heard from not only the GR staff, but also from Dr. Richard Insel, M.D. (Chief Scientific Officer at JDRF) and Dr. Judith E. Fradkin, M.D. (Director, Division of Diabetes, Endocrinology, and Metabolic Disease for the NIKKD at the National Institutes of Health [NIH]) about where we are in terms of research on prevention, treatment, and a cure for diabetes.

We found out interesting tidbits, like how the U.S. Department of Defense funded $20M for research into continuous glucose monitors - because the stress of war elevates the blood glucose levels of soldiers, and when your blood glucose levels rise, you don't heal as quickly.

We talked about the AP being important not just for the benefits of living healthier now with diabetes, but also because a healthy body (with tightened glycemic variations) will be more accepting of a biological cure. I hadn't thought of it in that way before - but it makes sense.

It was also brought up that the AP can benefit not only those with type 1, but those with type 2 as well. We all struggle with hyperglycemia, and the AP would help mitigate that for us all.

And then, we heard about why the Artificial Pancreas (AP) is stalling in its progress with the Food and Drug Administration (FDA). Much of what was presented was familiar to me, as I do tune in to those webcasts when I can, but they made a good point: not only will the artificial pancreas be the first of its kind in terms of that particular technology, its also a device AND a drug. Getting either one of those approved takes time, but both? It's a double-whammy of a paradigm shift.

That lag - that hesitation of the FDA to approve the AP for out-patient, real world trials - is why we were in our suits and big JDRF stickers, talking to Congress. (Seriously, loved those stickers. You could see them across the Hill, and wave frantically to your fellow JDRFers. "Heeeey! Someone I know, kinda!") A letter was sent out to all Senators and Representatives the week before we were there, urging them to co-sign a letter to the Commissioner of the FDA. This letter to the FDA asks them to "quickly and seriously consider draft guidance (effectively a research framework) submitted by JDRF and other leading clinical experts, and to keep the process moving so that these new technologies can be further tested and made available in the near future".

(We're to the point of needing to move from in-hospital clinical trials - which were very successful - to out-patient clinical trials. And we need the FDA's approval to be able to make that transition.)

Each meeting we had was a little bit different. Brian (who was the other volunteer there from the Cornhusker state, and thankfully knew his way around D.C. much better than I did) and I met with two of Nebraska's Representatives and a staff member for the third, and a staff member for one of our Senators. (Brian met with the other Senator on his own - more on that story later.) Everyone we met with was very cordial, and open to hearing what we were there to talk about. Some offices even had a JDRF photo frame out - though, maybe they knew we were coming. One Congressman in particular was so interested in the technology we were bringing up that he started asking me questions about it!

That's one thing I had forgotten in my nervousness - that listening to constituents is their job. It's easy to feel intimidated and get yourself freaked out about talking to someone in that position. You fear that you'll get there and forget your name, or what you wanted to say. You feel like you're just one small voice in a big ocean of problems and concerns that this person listens to. You wonder if your one, small voice can ever be heard above all that.

The truth is that once I got there and shook their hand, the nerves melted away, for the most part. The Politician is just another human being; The Office becomes just another room. (As the saying goes, they put their pants on one leg at at time, too.) You have their attention, and you have an army of supporters behind you (whether that be the other advocates in attendance that weekend, or the overwhelmingly wonderful number of you who followed the #JDRFGovDay tweets and lent us your encouragement and support). The hardest step is getting yourself to go do it, and now that you're there, you just talk.

And talk, I did. I talked about how living with diabetes for a quarter century doesn't make me an expert at living with it - that no amount of time can guarantee that knowledge. I talked about the costs of time and emotion that diabetes charges me. I talked about how today's technology is great, but it's not good enough. I talked about how an artificial pancreas could change my life - and wondered (out loud) what the heck I'd do with my free time, if I wasn't worrying about diabetes so much. (Pretty sure I actually used the term "diabetes brain" in one meeting - I hope they knew what I meant.) And I acknowledged that while a device automatically deciding on and controlling insulin delivery could be dangerous, living with diabetes is dangerous. And we can't afford to keep waiting.

That's what being an advocate is: speaking up when it's needed, not just when it's convenient. Having the audacity to put our voices out into the world, and to tell our own stories.

It's what we do here in the diabetes online community, and I hope it can also be what we bring out into the off-line world. Interested in signing up as a JDRF advocate? You can find more information here.

Disclosure: As always, these opinions are my own. JDRF has not asked me to blog about the Government Day event, nor have they asked me to promote their advocacy program. (Though I do volunteer on my local chapter's GR committee - so it's this thing I'm trying out.) As someone who was so proud to represent our community and cause during those four days (and always!), I'd be remiss not to recount what I learned, and how I interpreted the event.
Posted by Kim