One Too Many And Eleven Short.

I just spent 39 minutes on the phone with Peyton, a member of Sanofi's iBGStar tech support team. What we determined (rather, what I unofficially deduced from our conversation) is that the iBGStar is not a fan of tequila. And neither is an 18 day-old Dexcom G4 Platinum sensor, for that matter.

When I use the iBGStar meter, I typically keep it attached to my phone all day and use the case that encloses them both. I don't open the iBGStar app every time; actually, not even every day. When the app is opened, it automatically syncs the meter with your phone, and thereby downloads all of the readings it has recorded since the app was last opened.

After consuming a few margaritas and checking my BG eleven times throughout the course of yesterday evening (this is how I drink with diabetes - YDMV), I noticed that my last three readings were suggesting a pretty steep drop - and no thanks to my CGM, I couldn't verify this via visual aide - 356, 226, and then 184. Pleased that I was dropping but concerned with the velocity, I decided to open the app on my phone to help me remember the times of those tests. I had a need for speed (information).

Instead, I was informed that I would be on my own with this one. 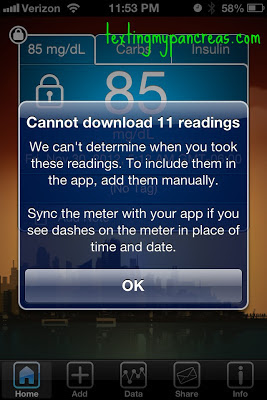 Excuse me, what? I then clicked the (only) button on the meter, to see if I could scroll back on there to see the times there.

What I realized, as did Peyton by the end of our lengthy phone conversation, is that there is no good reason my meter wasn't tagging date and time on those eleven readings. We tried everything to figure out why - close the app. Restart the app. Unplug the meter. Replug and sync the meter. Check the phone's time/date settings. Check the meter's time/date settings. Make sure the meter is fully charged (it was). Make sure the meter was fully plugged into the phone (it was). We must have gone through 30 different potential factors. (I also elected not to delete the app and re-download it. While I was able to back up the iBGStar data through my iTunes account, you can't actually look at it. Petyon told me that if I deleted and then downloaded the app again, I could reinstall the old data. I didn't want to muck around with it.)

We have no idea why, but the good-ish news is that it's recording those things again. I tested twice, voluntarily (he suggested I use control solution; I laughed) and both of those readings downloaded just fine, while continuing to ignore the previous 11. I could manually enter them, but seeing as how I don't know the times for most of those, I'm hesitant to do so.


I also was reminded that you always need a back-up for your back-up. CGM won't give you readings? Time for a fingerstick. Meter won't function properly? Use a different one.

It's possible that everyone in your usual device line-up will fail you at the exact time you need them most. Channel your inner boy scout, and always be prepared.