I recently finished reading, for the second time, the book Breakthrough: Elizabeth Hughes, the Discovery of Insulin, and the Making of a Medical Miracle, and I'm sure I'll reread it many, many more times. (Disclaimer: I received a copy of the book for free, when I attended the Lilly Diabetes Blogger Summit in May. No one asked me to write about it.) 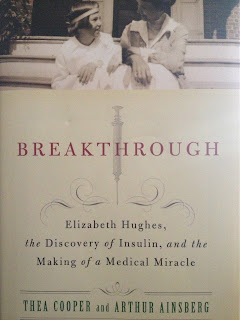 In 1918, an eleven-year-old girl stands in the kitchen of her family's elegant townhouse gulping water from a glass with such ferocity that it runs down the sides of her face. It is her sixth glass. {Prologue}

If you live with type 1 diabetes, I highly recommend that you try to find a copy of this book. It's enthralling, educational, enlightening. It's emotional*, especially when read by someone who relies on insulin therapy. And yes, it is a difficult read at times. But for as many times as it is difficult, it is also inspiring and eye-opening.


On this day in April, [Dr.] Allen was to tell Charles and Antoinette Hughes that Elizabeth would not likely survive the summer. Her only hope was to completely surrender to his extremely onerous [starvation] therapy. {page 9}

Elizabeth Hughes was diagnosed with type 1 diabetes in 1918. Insulin wasn't discovered and made available to the public until 1922, and Elizabeth was one of the first people with diabetes to ever receive insulin injections.

The descriptions of Dr. Banting really colored in the story for me. I knew next to nothing about him as a person, nor how he came to discover insulin. If you live with (or care for someone with) diabetes, you really should hear how the idea came to him, and how hard he fought to prove its truth.


Banting's initial idea was neither original nor successful, but he persisted in it, and his persistence led to a solution that was both original and successful. He would say later that if he had been more familiar with the literature on the subject and had known about the previous attemps, he would not have pursued his idea at all. {page 63}

Thank goodness for his aloofness. 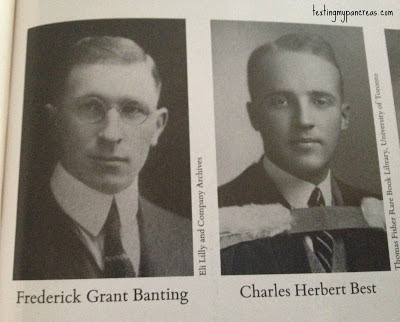 I don't want to give too much of the story away if you haven't read it, but I will say that it's very difficult to walk away from this book and not feel incredibly grateful for the work of Banting, Best, and the rest of the insulin team at the University of Toronto. Breakthrough also, of course, highlights the work of Eli Lilly and Company (as it should) to get the extract produced safely and consistently, and into the hands of the people who so desperately needed it.


Eli Lilly and Company agreed to delay its own clinical work at Methodist Hospital in Indianapolis in order to supply extra insulin to Toronto until Connaught [a member of the insulin team] could recover the ability to make its own. {page 179}

Insulin was now not only readily available, but also affordable. Although Eli Lilly held the exclusive franchise of insulin production in the United States, the company was committed to keeping the price as low as possible so that it would be available to all diabetics. By the end of 1923 the cost of treatment per patient was frequently less than one dollar per week and seldom more than two dollars. {page 228}

Banting is painted as a driven, frustrated, and mostly socially inept man searching for his life's purpose. He was uninterested in his physical appearance, preferring to dedicate his energy to his research. He questioned, argued with, and sometimes ignored authority. I like him.


Robertson blanched and asked Banting if the suit he was wearing was the same suit he had worn to meet Mrs. Hughes. "I only own one", Banting replied. After lunch, Robertson took Banting to the most exclusive tailor in Toronto to be fitted for a suit and overcoat. Banting complained about the expense and protested that "no one ever had a good idea in a dress suit". {page 199}

Especially interesting, to me, is how Elizabeth chose to address her diabetes in the public eye: she didn't. Breakthrough does a thorough job of framing the story in a way that helps you understand her viewpoint.


There were two things that Elizabeth was afraid of the public finding out: First, that Elizabeth Gossett [her married name], the dynamic, self-directed wife and mother was one and the same person as Elizabeth Hughes, the desperately ill diabetic girl; second, that her emancipation from the fatal destiny was, quite possibly, purchased at the expense of another child's declining health. {page 241}

It can be easy for me to become frustrated with the tools I currently have to help me manage my diabetes - nothing is as accurate, expedient, or consistent as I'd like. Breakthrough reminds me just how lucky I am, how far diabetes care has come, and what I can be oh, so thankful for.

*There is one part of the book that involves a very special dog and a very tough decision, and it had me in such a state that I had to put the book down and hug the stuffing out of my own dog, through my tears. But I'm a dog lover, so maybe this just hit me harder than it should have. Still, something to look out for.
Posted by Kim