Thank you to everyone who filled out the You Can Do This Project survey last week - I got so many responses that I had to close the survey early. Wow! (SurveyMonkey only allows 100 responses. I didn't think I'd get that many.)

I learned some things, I gained some reassurance about some things, and I received some new ideas that I wish I had thought of earlier.

Here are some of the results: 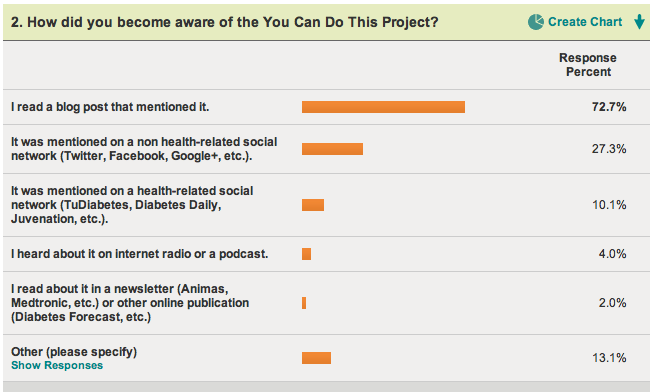 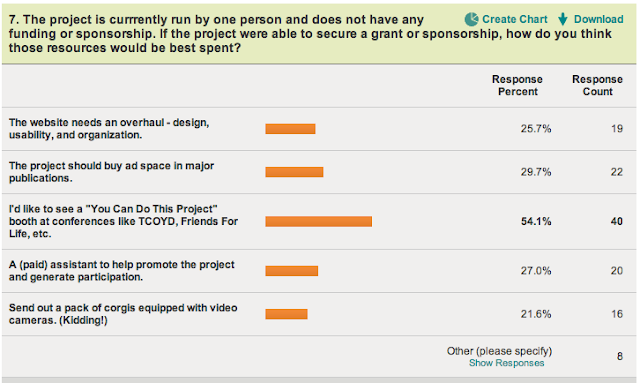 In short, I have some work to do. In the coming weeks I'll be revamping http://www.youcandothisproject.com/ to make it easier to navigate (I hope) and get all of the stuff in one place (read: no link list on this site anymore). Also, I apparently need to start tracking down some Camera Corgis.

Question 7 was especially enlightening, because a couple of those options were in the far-fetched category of my brain. They were the kind of "dream big" items I assumed could only happen at some point in the distant future. And as such, I tweeted this after seeing the feedback that was coming in:

And then something a little bit astonishing happened.

People started asking me where they could donate.

I got a flood of tweets and private messages, emails, and texts. I started realizing that the distant future might, in actuality, be this July.

I emailed the folks at CWD (who run the Friends For Life conference) and found out what it takes to get a booth there, and while I can afford to get myself there, I can't also cover the costs associated with running a successful booth. I've never done anything like this before, and I'm still trying to figure out how this is going to happen.

(You can also find this appeal on the You Can Do This Project website, under the "Donate" tab.)

If you're feeling inspired to help this happen, you can donate through the Paypal button found below. (Hopefully it works? First time I've done this.) Much in the same way that just one of the videos can impact multiple people, every dollar donated can help the project reach hundreds of people. No donation is too small.

Fingers crossed - let's get You Can Do This to one of the biggest diabetes conferences in the U.S.!

Thank you in advance!!

Labels: You Can Do This Project
Email ThisBlogThis!Share to TwitterShare to FacebookShare to Pinterest