The Book Of Better. 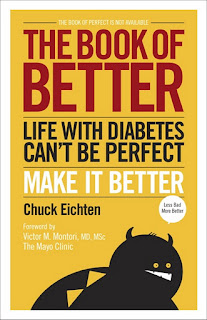 Earlier this month, someone at Three Rivers Press (part of the Crown Publishing Group at Random House) sent me an email about a book they just released, written and designed by a creative director at Nike who has had type 1 diabetes for 30+ years. The book was called The Book of Better and they wondered if they could send me a promotional copy. (I almost missed their email, as I've never had any contact with RH before, and it sort of looked like spam. Whoops.)

I really do like the book. I would have paid money for it.

It's not without its faults - I'll get to that later on - but overall, I'm a big fan of both the message behind the book and the way in which that message was delivered.

The whole theory - if you hadn't guessed it yet - is that while life with diabetes can never be perfect, it can always be better. Even if "better" is just a teeny tiny bit better. The book's author, Chuck Eichten, uses a casual, self-depricating approach that I appreciated. He admits early on in the book that he's made plenty of mistakes himself; that he is, in no way, a medical professional; that this book is a way to share what he's learned in the past few decades with diabetes. 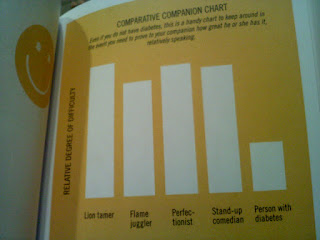 There's plenty of humor, which I totally hated. (What? I'm kidding. Of course I loved that.) It's hard to not like a book about diabetes that uses wording like "work my ass off", "A woolly mammoth's diet consists of (I don't know what).", "Diabetes makes you holier (Editor's note: Ha! Puns! Love!)", "There's plenty of fallout poop that comes with diabetes", and "OMIGOD!". There were several times while reading that I "Heh!"ed out loud. It's clever writing.

The formatting reads in much the same way as a blog - it goes heavy on the graphics, uses a lot of short and repetitive sentences, and tends to go HEAVY on the CAPITALIZATION and BOLDED WORDS. (It was a little overboard for my liking.)

One of my very favorite parts of the book was the following analogy:

"We shouldn't get confused into thinking that one variety [of diabetes] is not as bad as another variety. It's like saying, "My hair is not on fire that bad." That is crap. If your hair is on fire, you should treat it with concern and the utmost haste. My rule: If my hair is even slightly on fire, I don't pretend it's not. [...] Whatever type you've got, diabetes is screaming - YOUR HAIR IS ON FIRE! And we need to get that issue under control before it negatively affects our future." 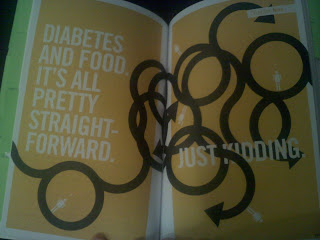 And that's pretty typical of how the book works - humorous analogies made, strong viewpoints established, and suggestions for action supplied. Chuck makes the smart choice to address the viewer as part of his team - "we" instead of "you", most often. He addresses all of those real-life complaints and concerns that PWDs have. He makes relatable analogies about motivation and persistence. He uses his own experience to supply the "why should I". He can scold you while making you laugh, which in turn, makes you think.

He talks about feeling "at fault" for having diabetes, about how we PWDs can become obsessive over food, about how frustrating it is when results are anything but consistent, about the "foreverness" of living with diabetes - and he does it all in a way that makes you feel like he gets you.

There were, however, some parts of the book I take issue with. Take it away, bullet points:


All in all, it was an entertainingly relatable and encouraging book. I think it's worth the read!

Disclaimer: Three Rivers Press provided me a free copy of this book, but did not oblige me to write about it in exchange for receiving a copy. As I mention in my blog disclosure, I'll talk about things if I like them (or really don't like them), and this was one of those cases.
Posted by Kim