A Second Letter to Reader's Digest: You Don't Get It.

To the Editor(s) of Reader's Digest:

Last week, I was disappointed to learn about your upcoming issue of "Reversing Diabetes", and wrote you an open letter and an email letting you know why. In fact, you'll find several posts to the same tune around the internet now - which I linked for you in my post last week.

But now, I've transitioned from "disappointed" to "angry".

Kelly Kunik of Diabetesaliciousness (and a super-star of our diabetes online community) got a hold of Karen Reynolds, the "Publicity Curator" at your publication last week. And after their exchange (which everyone needs to go read), someone from your company left this comment on her blog post in response to the concerns she expressed:

We know that you are concerned with the title of our publication Reverse Diabetes. This term, however, is widely used throughout the healthcare and health-journalism communities, not solely by Reader's Digest. Please be assured that we are committed to the same cause: to help the millions of Americans struggling with the disease. We, of course, respect your right to differ with our approach, but we know with complete certainty that we have helped hundreds of thousands of people improve their condition by using our magazines, books, and digital content. We respect your opinion, and wish you the greatest success in your work on behalf of all people with diabetes. – Reader’s Digest

You completely missed the point, "Anonymous".

We are concerned (to use your phrasing) because you're a reputable, established publication who should know better.

We are concerned because reputable, established publications such as yours should be fact-checking information with qualified medical professionals, not using terms because they can be found in "other healthcare and health-journalism communities". (And by "qualified medical professionals", I mean the type of doctors and researchers that deal with diabetes on an intricate and extensive basis - endocrinologists, for example.)

You're better than that. At least, you should be.

Frequent use and acceptance of a phrase doesn't constitute factual information. You know that, right? I mean, people used to think the Earth was flat at one point, too.

We are concerned because, like so many of those other "healthcare and health-journalism communities", you're using the most attention-grabbing phrasing you can muster to sell magazines. We know; this is a common practice. Magazines have to stand out among the clutter to grab attention, and make a profit somehow. 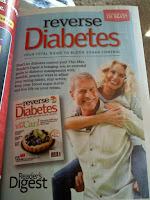 The problem, though, is that you're addressing a chronic illness here. This isn't "lose 10 pounds in 3 weeks!"; this isn't "The Five Foods You Aren't Eating But Should Be"; and it's definitely not "Shocking Confessions From Your Favorite Movie Stars!". You aren't a tabloid, Reader's Digest. (Right?) You're shaping the perceptions that people have of diabetes. The general public will see the cover title and headlines - maybe they'll even flip through a few pages. Some will read it cover-to-cover, sure.

And one of the conclusions they'll take away from it is that diabetes is somehow our fault. That, gosh, if we had only eaten more vegetables, or not had so much candy as a child, or exercised more, we wouldn't have "done this to ourselves". And why aren't we just following all of these "easy steps" outlined in your magazine - we could have cured ourselves by now! (/end sarcasm)

Diabetes, as a disease, isn't "reversible". The symptoms of type 2 can be improved; the progression of the disease may be slowed or halted, but not the disease itself. Because, Reader's Digest, if diabetes could be corrected so easily by the tips you're sharing, why would organizations like the Diabetes Research Institute, the American Diabetes Association, and the Joslin Diabetes Center still be around, researching prevention and a cure?

You are profiting off of the commonly-held but completely-false assertion that diabetes, in any form, can be reversed. And we - the ones who live with the disease - are the ones who will pay the price for it; in prejudice, in stereotypes, and in lost research dollars.

Shame on you, Reader's Digest.

We are concerned because the picture being painted by these Reader's Digest "Reverse Diabetes" publications simply isn't the truth - but, sadly, you seem to already know that since your email to Kelly had this in it: "With Reverse Diabetes, we offer empowering, motivating, medically-substantiated ways for people to halt the progression of their condition and lead healthier lives. This includes lowering and stabilizing blood sugar levels, reducing heart-disease risk and increasing their overall sense of vitality."

You realize that your publications may help people "to halt the progression of their condition" - yet that's not what you are calling your magazines. You aren't calling them "Teaching Your Diabetes What's What With Healthy Choices!", or "Live A Better, Healthier Life With Diabetes!". You are calling them "Reverse Diabetes", which isn't the same thing at all.

Your lack of comprehension of the problem, the insensitivity of your "anonymous" blog comment, and your inability to openly respond to the diabetes online community who contacted you (you'd do well to take a page from MTV on this one): they all lead us to one, sad conclusion.

You just don't get it.

If you'd like to email the editors of Reader's Digest with your thoughts on their "Reverse Diabetes" series of publications, you may reach them at letters@readersdigest.com.
Posted by Kim