All of a sudden, I couldn't focus my eyes on anything.

I knew my 8 month-old daughter had her eyes fixed on me; my peripheral vision worked enough for me to know that she was jubilantly swinging her legs back and forth in the seat of the grocery cart. I could tell that she was grinning and waiting for me to return her smile, as she often does. Instead I reached behind her to grab my purse.

My hand instinctively went first to my Dexcom receiver. I clicked the button to wake it up, and it told me I was at 113 mg/dL with a straight arrow, meaning that it thought my blood sugar was in range and steady. "I don't think that's right", I mumbled out loud - there's no other reason my vision would have suddenly changed. Reaching to the right-most interior pocket, I searched for that plastic tube's familiar shape; the one that holds my glucose tabs.

I picked it up and shook it. Empty.

"Ugh, are you seeeeeerious...", I muttered. I turned the cart around and headed for the checkout, still unable to really focus but knowing that all of the fast-acting sugar was up by the registers, so that's where we needed to go. Should I try to test?, I thought to myself. I decided against it for two reasons: I knew that trying to balance a testing kit on the handle of the grocery cart was a no-go because tiny hands would try to "help", and I also knew that it was safer to just treat the possible low blood sugar when in doubt, and test later to confirm. I caught Rabbit's gaze, smiling meekly at her. I would keep us safe. I would keep her safe. "We're okay", I said out loud in a sing-songy voice, mostly to her but also to try to convince myself because I wasn't so sure we were.

We got to the checkout and my eyes found the soda cooler. I don't want soda, part of my mind said. Don't they have juice? I don't see any. When I tried to look at the candy display to my right, it shifted and blurred. I could not come to a decision. Chocolate isn't a great low treatment because it doesn't work as quickly. Do they have Starbursts? Wait, that's not good either; lots of chewing. And on and on, until the rational part of my brain ducked its head in, cutting through the low-induced indecision for juuuuust a second to say, Literally ANY OF THESE THINGS can save your life right now, just pick one and eat it.

With Snickers bar in hand, I swiped my debit card. I didn't even know how much we had spent, but we had two bags of groceries suddenly ready to go in the main compartment of our cart. Maybe once I start walking, my eyes will be able to focus. (Sidenote: I have no idea why I thought this.)

I pushed the cart of precious cargo out to the parking lot, still not touching the Snickers. Too many things to juggle at once; I'll eat it once we get to the car. The sunlight hit our faces and the Rabbit squinted her eyes. "We're aaaaallmost there, punkin'." I felt the symptoms of the low finally kick in - I felt weak and helpless but determined that I would not pass out on the way to the car.

And I didn't - I even got the groceries into the trunk and my daughter into her carseat. (Not gracefully, but I did it.) Only as I finished inhaling the Snickers bar did I realize we'd bought bananas, so I ate one of those too. I turned up the radio (silent cars seem to upset the wee one) and we sat for a while in the parked car, my daughter batting at her toy monkey hanging from the carseat handle and me finally testing my blood sugar a few minutes later.

That's the thing about living with diabetes - I'm fine, until I'm not. Once lucid again, I scolded myself for potentially putting us both in danger: Couldn't I have treated that low before we ever left the safety of the building, instead of confining myself to the car where no one might notice if I passed out? Shouldn't I have checked my glucose tab supply before we ever set foot in the store, knowing that grocery shopping makes me often run low? What if I did pass out? Would my daughter be okay? Would the paramedics find my medical ID bracelet; the one whose colorful beads make it look a lot like a normal, recreational one? Should I have said something to someone? Diabetes gives me so many reasons to question myself. 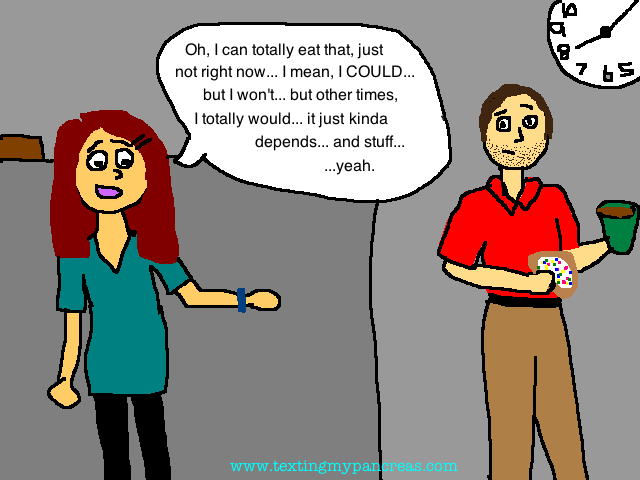 You can be as vigilant as possible, use the latest devices, dutifully take every medication on time, and eat all of the "right" things, and incidents like this can still happen. The answer to "Am I okay?" always has this asterisk on it, as the answer is never completely yes or no.

The knee-jerk response when I say that "I'm fine" belies the intricate nature of what's going on both in my body and in my mind, and I hate that sometimes I have to admit that the answer to the question "Are you okay?"  isn't so cut-and-dry:

Probably? I guess we'll know in a few minutes.