Because this post seems to be getting a lot of traffic via Google searches, I want to update it with a couple of thoughts:

tl;dr: I tried the Medtronic Enlite CGM and my experience was reminiscent of an internet meme. 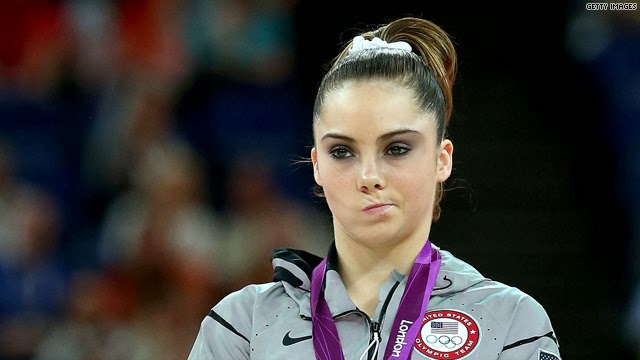 I did a shorter-than-I-envisioned trial with Medtronic's new Enlite CGM system this week. Medtronic's marketing team contacted me after reading my post about looking for a new insulin pump and asked if I would like to try out the 530G with Enlite system, to aid my decision process.

I thanked them for the offer, but reiterated that I have no interest in switching to Medtronic's pump (as I mentioned in that post) but the opportunity to try out the new Enlite sensor intrigued me a bit. I've only ever been a Dexcom customer when it comes to CGM technology, and while Dexcom's Seven Plus, and now the G4 Platinum, come with their faults... I've grown very fond of them. It occurred to me that my opinion/crush/moderate-fangirldom of Dexcom's CGM wasn't really backed up by a well-rounded education - how could I know it was so great if I had nothing to compare it to? - and so would Medtronic maybe just let me try the sensor part of the system?

On Monday afternoon I went to my endocrinologist's office to meet with my local Medtronic rep and get hooked up to the Enlite CGM. Because Enlite doesn't have a separate "receiver" like Dexcom does, this meant that for two days I was wearing an Enlite sensor on my body (in addition to a Dexcom one) and then carrying around a Medtronic/Minimed pump that had no insulin, cartridge, or tubing in it - an empty pump whose screen let me view the CGM data (in addition to my Animas Ping, which I was actually pumping with). WEAR ALL THE DEVICES!

My initial impressions in those first few minutes of setup were good: oh, that sensor looks smaller than the one I remember seeing before; the wire part that stays under the skin feels a lot more flexible (read: comfortable) than the previous model; the real estate required to wear it is less than a Dexcom sensor; the rep said the Enlite is 31% more accurate. ("31% more accurate than.....?" "Our previous CGM." "So, still not as accurate as a Dexcom G4 Platinum sensor. Got it." ::awkward transition to next topic::)

We used the "improved" insertion device; a block of gray plastic with a bright green button on the side, whose main feature was that the CGM needle would not be visible while inserting the sensor - a plus for squeamish, I think. The insertion went smoothly - I was delighted to remark that the needle barely hurt (I would say it's comparable to what I feel with a Dexcom sensor insertion), and with a nurse's help, we got the inserter removed and the sensor taped down. After a few instructions on menus, alarms, and settings - I was off!

Within the first hour, my Enlite receiver was vibrating with a "LOST SENSOR" message. I think I must not have paid enough attention to the instructions, because it took me several tries to get the right combination of buttons (down arrow, esc, act) pressed in order to clear the error message and get the "pump" to stop vibrating. I called the rep to let him know, and he walked me through how to "find" the sensor again. The callibration period (two hours, just like with Dexcom) continued.

The Medtronic rep and I texted back and forth periodically throughout my trial, troubleshooting as needed. His availability was both reassuring and appreciated.

Throughout the rest of Monday evening, I watched the graph bounce higher than what my meter or Dexcom receiver were showing. Overnight was less than restful due to the combination of high alarms and "WEAK SIGNAL" alerts that buzzed from the Medtronic receiver every time I rolled onto the Enlite sensor.

Tuesday morning found more of the same - frequent error messages of "WEAK SIGNAL" or "LOST SENSOR", so when the rep texted me again to check in, I told him of the error messages and sent him a photo comparing the Enlite screen with that of my Dexcom and my meter.

I wasn't sure, and neither was he, why this sensor wasn't getting with the program. I've worn Dexcom sensors in this same area before with great results, and I wondered if perhaps the Enlite needed time to "marinate", just like a Dexcom sensor would - the first 12 to 24 hours are always off! (And to be fair, with time it did get more matchy-matchy with my other devices.)

But with so many error messages it seemed to suggest that either the sensor itself was bad, or perhaps I didn't have enough interstitial fluid in that location for proper readings (I really don't think that was the case). We made a plan for me to stop in the next day to swap out the buggy sensor for a new one.

I swung by my endo's office Wednesday after work; this time the rep was not there, but I met with a nurse I'm familiar with. We loaded up the insertion device, and she left the room so I could have some privacy. I lined up the device with a spot on the right side of my stomach, clicked the button and then let go (the letting go is what makes the needle plunge into you), waited five seconds, then once again pressed the button and lifted the insertion device straight off.

"Well, crap!", I said. Not wanting to admit defeat, I used my finger to push the sensor back and click it into place, so that I could try again (DO NOT TRY THIS AT HOME). CLICK! SHUNK! CLICK! I lifted it once more.

"Noooo! What?" I tried for a third time, but now I asked the nurse to come back in the room. I did the click-and-shunk before she came in the room; all she had to do was help me remove the insertion device.

"Make sure you're pressing down with two fingers.... and then just lift straight off." I did.

And do you want to guess how that went?

She looked just as perplexed as I was. "I've never seen that happen! Let's get a different sensor." I switched to the other side of my stomach, just in case. Loaded it up, click, shunk, click, lift.

Sensor came with it.

Let's try another new sensor! (So now we're on the third sensor try of the day, and the fifth insertion attempt.) Back to the right side of my stomach, because the left side HURT when that needle went in.

I was now bleeding out of five different holes in my stomach, with no new hardware to show for it.

"I think we're done here", I told her. I peeled the two-day old "bad" sensor off, and proclaimed my trial period over. (The sensor is approved for six days of continuous use, so I could have worn it the whole week.) 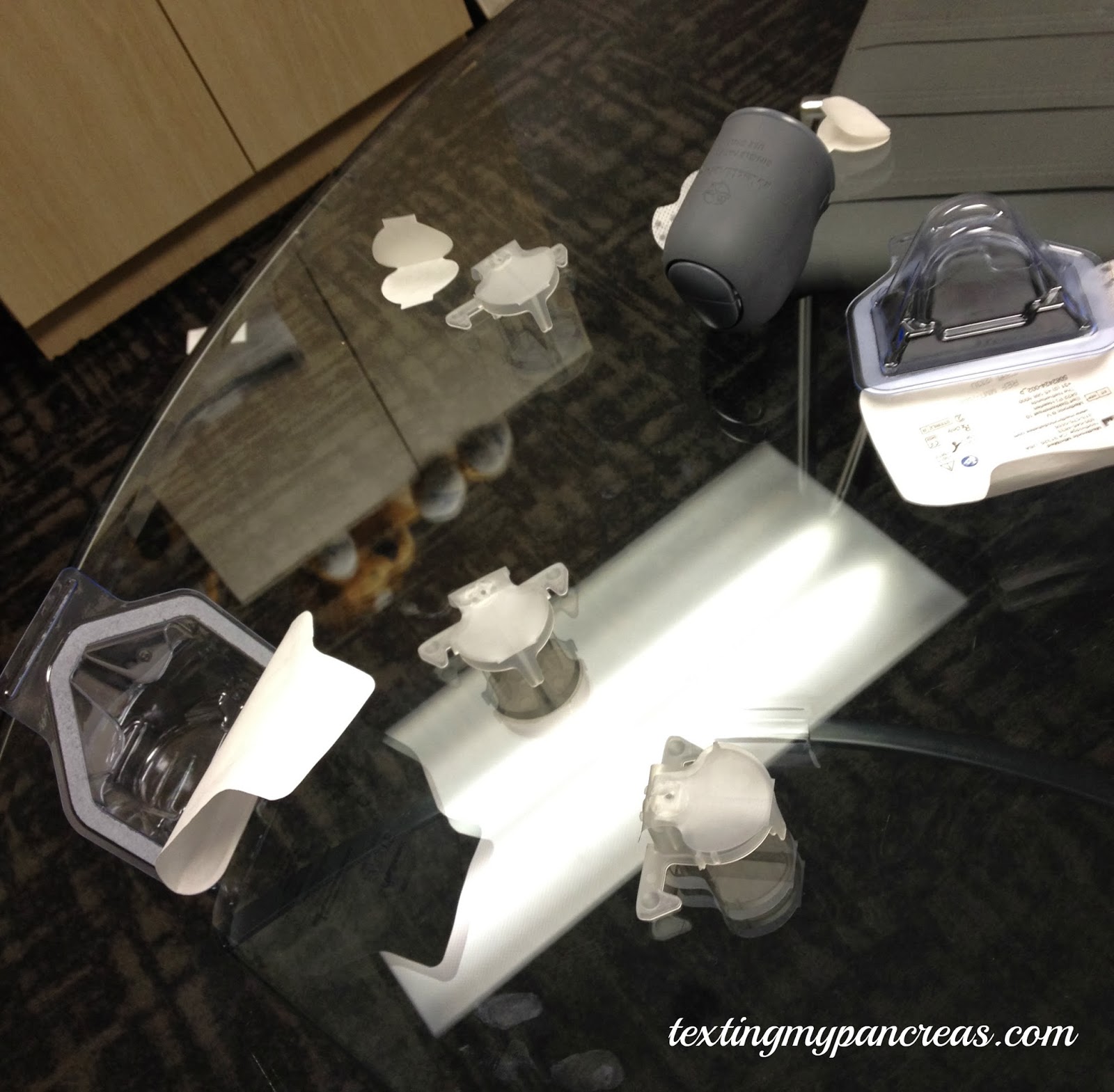 In summary, I think the insertion device isn't very well designed. I understand the importance of "hiding" the needle, but either the sensor needs a wider adhesive area or you need to be able to actually touch the tape (the inserter completely covers it when using it) to hold it down while lifting off the inserter.

And when you combine this problem with all of the WEAK SIGNAL! and LOST SENSOR! alerts I got, the artificially high results and not-always-matching trend arrows, and the tiny black-and-white screen...

My skepticism going into the trial was not unfounded. I'm still firmly planted on Team Dexcom.