I feel as though I've regressed to the state of a four-year-old on a road trip: "Are we there yet?"

(If you were looking for a "I love being pregnant!" post, keep your seatbelt fastened. This isn't your stop.)

One early morning, I noticed that my rings weren't quite sliding on like they used to, and I bristled. Glaring sternly at my ring finger, I used my mental telepathy to express that "no, there's been a mistake, surely. I haven't had any salt yet today. (I wasn't sleep-eating potato chips, right?)". I had hoped I could reason with myself, but shockingly, it didn't work. I'm just swelling up in all extremities now, at any given time apparently.

Things that used to be easy before, like oh, I don't know, walking or going up one flight of stairs or not running into things stomach-first have become significant challenges as of late. Did you know being super pregnant also makes you burp all the time? Yeah, me either. Awesome. Super. 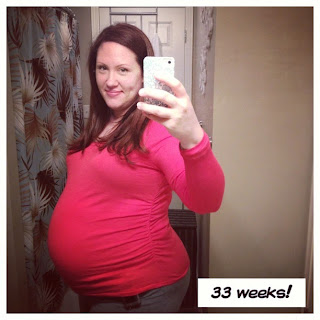 I'm on my third iteration of Palmer's Slather This All Over Your Belly False Hope Cream®, but my stripes are still pretty bright. I'm told that stretchmarks fade after the baby's out... right? I hope that's true, otherwise my kid is going to grow up believing I'm half-tiger and I don't want to explain in a few years to some nice stranger at a grocery store why my adorable daughter is roaring at me.

Baby Girl is still moving around frequently, but not as much in the same enthusiastic, Thumper-esque ways of her youth. I'd imagine she's feeling pretty cramped in there by now, so her dance moves are now less Cupid Shuffle and more Mom Dancing. She'll sometimes stretch a foot out, leaving the angle of my stomach so off-kilter that I press back on her because tummies aren't supposed to look like this so stop it. You can do your stretches next month, after you move.

As for the medically-related whatnot, we're still doing well. My blood pressure actually measured lower than it has been last week, which is great, and the little rabbit has now passed three of the BPP tests with perfect scores. As for measurements/weight estimations, I'm starting to wonder if I really am growing a large Muppet in there, because the percentile her weight falls in has steadily crept up. Is she just having a long growth spurt? Is it because her dad was a large baby, too, or because I'm tall? Is it because of the spikes in blood sugar I wasn't able to tame? Maybe all of the above. She still has a few weeks to bake, so no one is freaking out yet in relation to her size, but it's enough to make me wonder if 39 weeks is still a realistic goal.

The diabetes part of the equation has been... well, it's actually given me a break for a couple weeks. I don't mean that it's gotten easier, or that I'm not taking the hugest amounts of insulin I've ever heard of, or that those food boluses don't happen several minutes or sometimes a full hour before eating, but the results of those efforts have been more visible. My endo was actually really pleased last week with how I'd handled the previous several days, and made adjustments based on the speculative temporary basal rates I'd tried.

(Sidebar for the newly-pregnant or planning-to-be ladies out there, because at some point I wanted to be sure to pass on these gems: there are a couple of websites/newsletters that have been super helpful for me. If you haven't yet, check out Lucie's List - the site and weekly newsletter based on your due date - for some real talk on what to expect throughout the whole ordeal, what you're actually going to need gear-wise for baby, and reassurance that whatever weirdness you might encounter is probably a normal pregnancy thing. Also for good advice and information, but also for some of the funniest writing you'll encounter, do the same with Pregnant Chicken. Her weekly emails make my... week. Seriously, she's wonderful.)

Four to six weeks left, and while I'm not sure Aaron or I will ever feel "ready", we're feeling pretty close to that. Which will have to do!