Revisit: There Is No Spoon. 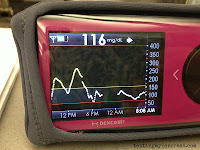 After reflecting on the past few days' CGM graphs, I'm reminded of this post from 2011. Pregnancy is this exaggerated version of what living with diabetes has been like for me - with 100% less predictability, more exaggerated swings, and super stubborn blood sugars. While I want to achieve "perfect" numbers during this pregnancy so that we can avoid all of the stuff no one ever wants to deal with, I also have to remember that perfect doesn't exist in the real world.

But, perhaps, my best will still be good enough.

I'm not sure where it began.

It had never occurred to me that a "perfect" diabetic wasn't actually a real thing. My past experience had shown that the medical world (which was all I had at the time, as this was B.D.O.C.) tended to make it very clear that there is an acceptable range, and it's [here]. And if you can't get yourself there, it is because you aren't trying hard enough; you aren't disciplined enough; you aren't following their guidelines as you should be. The focus of blame tends to be on the patient's ability to self-manage, rather than the disease itself.

Labels: Diabetes Shenanigans, Getting It Together, Pregnancy
Email ThisBlogThis!Share to TwitterShare to FacebookShare to Pinterest