Yesterday afternoon, I realized I that hadn't gandered at my CGM in a while. I dug it out of my purse, clicked a button, and saw that I was planking nicely around 121. "Oh, cool", I thought, and tossed the Dexcom receiver back in my purse, all non-chalant like.

It didn't really strike me until later how messed up that reaction is.

Let's think about this for a second...

Crashing lows are so memorable and impactful on my life that I'll take the time to write about them, draw cartoons about them; heck, I'll even draw cartoons about other people's low blood sugar experiences. And when things go the other way - oh hiiiiiiiiigh! - I'll take the trouble to recount the whole experience via video. I'll spend time retracing my steps - was it the carb count? Was it an infusion site gone bad? Was it one of those times where I decided to just throw some insulin at food and hoped something good would happen?

Highs and lows get tweeted, Instagramed, Facebooked, texted about, and yelled at. But numbers that are actually where they are supposed to be? 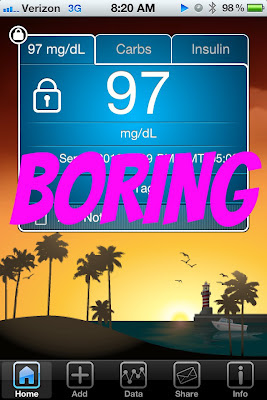 The problem lies in the reinforcement. If I'm low, I pay attention to what's happening and probably get to eat something that tastes good. If I'm high, I pay attention to what's going on by testing, keeping hydrated, and tweeting that I feel like maple syrup may have taken over my cardiovascular system. In either case, I might share what's going on with me via social media, and I would likely get supportive well wishes from my friends. It's then that I'm taking the time to acknowledge and think about what is happening. I'm reflecting on what the cause may be, what I might do to avoid it happening the next time, and reassuring myself that it's just one number.

When that "one number" is in range, however, I generally don't pay it much mind. How messed up is that? In a more perfect world, I'd be spending all of that brain power enjoying those pretty numbers. I'd be congratulating myself for finally being able to guess what my body needed at that exact moment. I'd be positively reinforcing those times.

Why is it so difficult to celebrate the good like I would problem-solve the bad?

And yes, "good" is subjective, and probably not the best word to associate with things like glucose numbers, but let's just go with it for now. I'm deciding to celebrate those moments a bit more. They may be small, but they will (hopefully) add up to something worthwhile.