Disclosure: Last week I was contacted by a PR agency representing LifeScan/OneTouch. They asked if I'd like to receive their brand new VerioIQ meter for free and provided me the meter along with all of the parts I've pictured here, as well as a box of 50 strips. While they hoped that I would write an evaluation of their product, I was not required to do so in order to receive it.

Let me start off by saying that I'm a little biased. OneTouch made one of the very first glucose meter I can ever remember using - that big, clunky gray brick of a meter in the snap-shut case. Anyone else remember this thing?


I used that thing for years. I used it so long, in fact, that when I met with a brand new CDE after college and we were trying to figure out my blood sugar patterns, she finally asked what kind of meter I was using. When I told her, her eyes grew to three times their normal size. "WHAT? Oh, no. NO. That thing's ancient. We're getting you a new one." 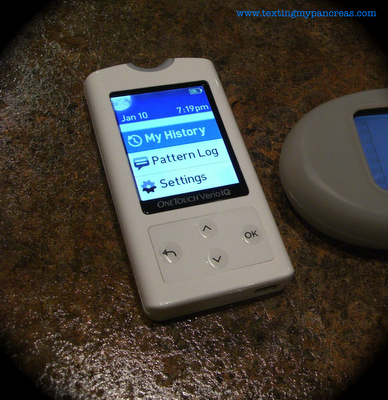 There's quite a bit that I like about this meter, and that was before I even tested my blood with it. It's kind of sexy-looking, right? Nothing about it really screams, "I have a chronic illness! Medical equipment alert!", and I appreciate that. Even my co-worker, upon finding out what it was, was aghast. "Really? Holy crap, that's awesome! It looks just like my music player." And she was right: brothers from a different mother, if you will. 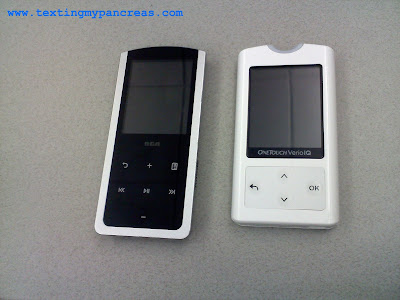 The meter has a USB cable to download readings to your computer, and an AC adapter so that it can be plugged in to recharge. (Cool!) The charge is reported to last two weeks, and so far I believe that to be true. I've been using it out of the box for the past five days, and only one of the three bars on the battery display have vanished.

There is also a "Pattern Guide" that was included with my set, but apparently won't be included in the for-sale version. (What?) From the press release: "A companion OneTouch® Verio™IQ Pattern Guide is available to patients from healthcare professionals or by contacting OneTouch directly at 888-567-3003. It offers possible causes and potential solutions for High and Low patterns based on guidance provided by leading diabetes healthcare experts." 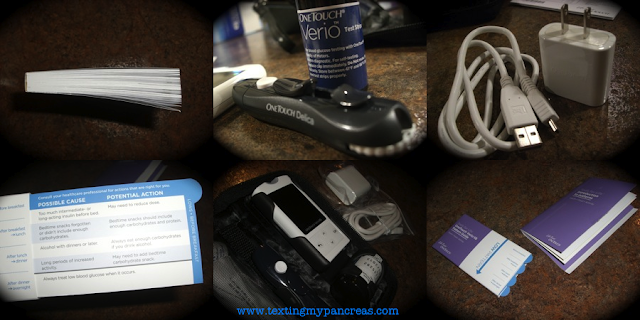 The big deal about this meter, besides how it looks, is what it does. Also from the press release:

“All meters will tell you your blood sugar level at a particular moment in time. But, the OneTouch VerioIQ System is the only one to compare your current result with your previous results and to proactively alert you to important patterns you might not even be aware exist,” says Michael Pfeifer, Chief Medical Officer, LifeScan, Inc. “Our goal is to make a real difference for people with diabetes by providing simple tools that help patients discover ways to improve their glycemic control. By analyzing the information after each test and identifying patterns as they occur, this system helps patients and their healthcare professionals focus on fixing a potential problem instead of trying to find it.” 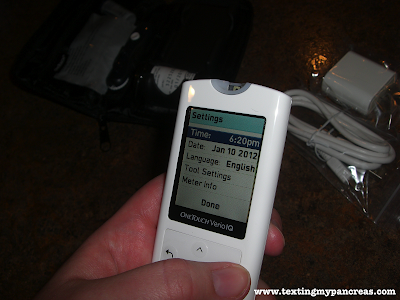 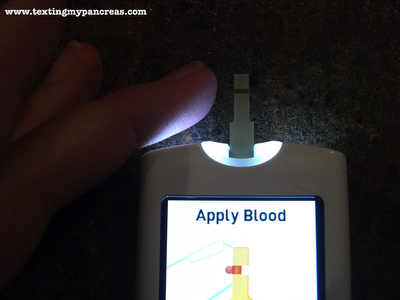 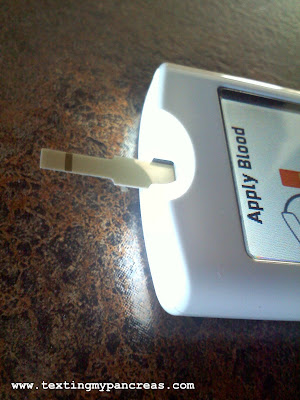 I've been using this meter for a few days now, and I really like it - the feel, the usability, the visual happies (like the graphics when it's counting down from 5, and the icons for "Before Meal" [a whole apple] and "After Meal" [an apple with a couple of bites missing]). I'm a visual person. This kind of stuff pleases me.

Other things to take note of:
If I could change anything about this meter, I'd want it to double as the remote for my Ping insulin pump. That would be rad.

Other than that? Yep; I'm a fan. I can see this being an especially popular meter with kids, based on the way it looks (for them) and the feedback it can provide (for their parents). Or, with people like me, who like those visual happies.