I blame the peanut butter and jelly sandwich.

I had wondered why I was spiking so hard an hour after dinner. True, that's not a typical dinner for me, but it still seemed odd. It should taper off soon, I thought. I put the Dexcom receiver away and went back to real life for a bit.

About 45 minutes go by, and I hear the familiar vibration coming from my purse. I sneak a peek.

I had tested at 75 mg/dL before eating that stupid sandwich, and convinced myself that bolusing after eating was the best option. Except that I never remembered to program that bolus.

Humalog pen to the rescue! Being mad at myself for forgetting, and knowing that the pump site I had in was over 3 days old, I opted for an injection. A rage bolus, to be more specific. There was no math involved in what I dialed up; a simple "Yep, sounds good" from myself acknowledged that this would be the dose I'd go with.

Life went on. My CGM showed me dropping, dropping. Good, I thought. 102 looked like a great number to be settling at.

Then I realized I hadn't done an actual blood test in a couple of hours - I had been relying on CGM data - and it might be a good idea to change that. 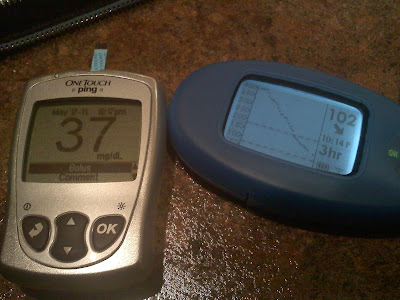 No symptoms. No indication that anything was out of the ordinary. I shoved some glucose tabs in my mouth, and hopped on Twitter.

Then the symptoms hit.

I decided to test again. 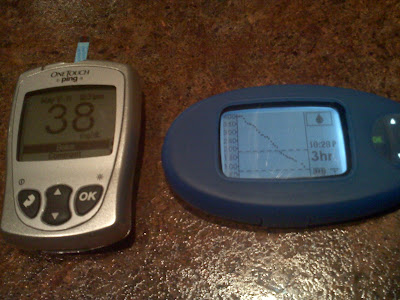 Juice box. Banana. Banana with chocolate syrup. My vision started to get blurry.

My brain was rationally thinking, "This is exactly what over-treating looks like. I know I don't need all of this."

My body was on auto-pilot. Survival mode kicked in. "Yeah, I know. But you're going to keep eating."

That's the thing about these types of lows. They get just alarming enough that eating the entire kitchen doesn't sound all that crazy. And when you do what I did - eat enough to cover the low blood sugars of three people, not just one - you set yourself up to be catapulted to Hyperglycemia Land in no time.

It's just how the game is played sometimes. Bump, set, spike. Move on.