Towards the end of my workday yesterday, I noticed that my “emergency stash” was depleted. Even though I almost always have something like glucose tabs or fruit strips in my purse to treat lows with, I like to keep some back-up candy in my desk drawer. It’s there for times when I’ve run out of the aforementioned options, or for the times when candy sounds a lot tastier than fruit-flavored chalk. (Which, surprise!, it always does.) 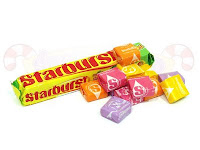 I ran across the street to the drug store and spent a little while pondering my hypoglycemia-resolving choices. (Starbursts are a favorite, because 4 ‘bursts will bring me back up to normal without overdoing it. Also, I’m a fan of the fact that I get to have one of each flavor. The symmetry makes me happy.) As I started backing away from the candy, fists full of Rainbow Taste, something odd happened.

Apparently, an older gentleman had been watching what I was doing. As I caught his stare (because, indeed, he was staring), he broke into a sly grin. His hands then performed the “tsk tsk” action, and he walked away.

My first reaction was shock.  I wanted to yell at him. Or maybe throw some candy. I did neither – I think I just gave him an incredulous look.

What I realized over the next few seconds was that I was taking his reaction out of context. There was no way he could have known, in that moment, that I had diabetes. My insulin pump was concealed, as was my CGM. I wasn’t wearing medical ID, nor was I in the middle of checking my blood sugar. To him, I just looked like a lady who really loves her candy, and he apparently thought I was “pigging out”. Of course, my diabetes-centric mind had immediately jumped to defense mode and I had initially assumed he was trying his best as a D-Policeman to rain on my sugar festival.

Diabetes is something that I’m always thinking about, but I have to remember that it doesn’t mean diabetes is always on everyone else’s mind. Sometimes, I forget.
Posted by Kim