I haven't mentioned where I work before, and probably won't name it specifically, but I work in a big ol' office.  And it's student loan-ish.  I spend most of my day sitting in gray, fabricy square, in front of a computer - and nowhere near a window.  It feels a lot like this: 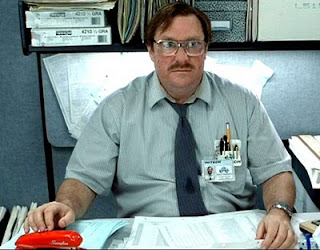 There are some things I like about my job (epically laid-back boss who is completely cool with my zillions of doctor appointments; good co-workers/friends who lower my stress levels with well-placed puns and pictures of Corgis; I can wear "dressy" flip-flops and shorts), some things I could do without (mistake- and socially inappropriate conversation-prone co-worker; tendancy to be bored to the brink of napping) and some stuff that just "comes with it".

Part of what I do involves processing death certificates for borrowers, and natural curiousity leads me to always want to read through them more than is necessary - namely, the cause of death.  Hey, it's interesting sometimes.  Most are car accidents or drug overdoses.  But, every once in a while (read: today), there's one that hits a little too close to home.

Cause of Death:  Hypoglycemia; Uncontrolled Type I Diabetes

Well, sheet.  (Since I'm already in Work Mode by talking about this, I might as well use my Work Swearing To Get Past The Email Filter.)  No one likes reading that the disease they have was a cause of death for somebody.  What struck me most about this, though, was the use of the term "uncontrolled".  To most, it would probably look like this person didn't take very good care of themselves.  Didn't try hard enough.  Didn't care.  Didn't take it seriously.  Maybe that's true, but maybe it isn't... it really only takes one low while sleeping, one low where your body doesn't wake you up, and it's Game Over.  I'm not sure you can conclude that the person's diabetes was "uncontrolled" if they die of hypoglycemia.  What if it was just one Uncontrolled Night?  Or one Uncontrolled Afternoon?  What if they were otherwise healthy and balanced, and this was that one time things didn't go as planned?  That's something very different - and very scary.

And yet, that's all we're left to know about this "uncontrolled" person.

P.S.  Have I sufficiently bummed you out?  Yeeeeah, sorry about that.  In an effort for balance, here's a puppy: