(Part One can be found by clicking here.)

It's a little surreal to be wheeled into an operating room for the first time. What I remember thinking as the nurses glided me and my wheely bed down the hall: "I'm about to have surgery. She's about to be born. I hope she's okay. Do I still have legs?"

The doors flew open, and Justin Timberlake greeted me in song.

"Are you kidding me? I really get to listen to JT during this? BEST OPERATION EVER."

The nurses laughed. "We're happy to leave the radio on for you, or turn it off - whatever you prefer." "No, no, this is great - it will help relax me a bit." I hadn't realized until that moment that I couldn't stop myself from shaking. I couldn't tell if it was the drugs, the nerves, or all of it.

My bed and I were glided to the middle of the room. One, two, three, LIFT! All of a sudden I was on the operating table/bed in the middle of the brightly lit, all-white room. A blue cloth was draped from my shoulders up to a height that obviously I wouldn't be able to see over (I remember thinking, is this really necessary? It's not like I'm going to try and sit up to see what you're doing...), and an anesthesiologist/nice man in glasses greeted me.

"Hi Kim, do you know what we're here to do?" (I imagine this is a litmus test of some sort to see how "with it" I was; that or someone didn't get the day's agenda ahead of time.) The drugs were definitely doing their work on my body, but my mind was still lucid. "I'm having a c-section so we can get this baby born!"

The doctor grinned at me. "Good, good, good." He spoke with a kind voice and told me what we were doing, what I should expect, and who was in the room. He tested how high up in my body the anesthesia was working and electrodes were placed on my chest.  Aaron joined us, and took a seat by my head. I couldn't exactly tell at what point the procedure started, which I guess is a very good thing, but soon I could feel some light pressure on my stomach, moving from left to right. I felt more pressure. Bruno Mars took his turn at the microphone. A few minutes passed.

"There you are! It won't be long now!", my OB enthusiastically called out. Aaron and I looked at each other, or rather I tried to twist my head in a way that would allow me to make eye contact with him. He rubbed my hair through the surgical cap.

I looked to Aaron, whose attention focused past the drape. "Go; go see her; take pictures", I told him. The room was a flurry - me being sewn up; the baby being attended to.

All I wanted then was to hear the sound of her being "okay"; the sound that would let me know her lungs were more than just intermediate. I needed to hear her cry. Ten seconds, twenty, thirty... I'm not sure I breathed while waiting to know if she could.

It was only a few more moments (though they seemed so much longer), and then I heard her. It was the most beautiful whimper I've ever heard, and the crescendoing sound seemed to be directly connected to my tear ducts. I teared up immediately, thankful to have gotten to that place in time where I knew that she and I had made it.

She was here, and she was okay.

The anesthesia had me feeling quite fuzzy by the time Rabbit arrived, so much so that I had to struggle to keep my eyes open while they cleaned her off and got her stabilized, and I also threw up in the recovery room. Like you do.

Rabbit experienced some low blood sugars in her first 24 hours in the world - immediately after birth being one of those times. Soon after I had ralphed, they alerted Aaron and I to this and asked if we'd prefer to feed her a bottle of formula or to have her hooked up to an IV; we opted for the bottle route. (I'm still surprised they let me hold her right after getting sick, but I really did feel much better afterwards. Maybe that's normal "I Just Had Surgery" stuff.) By the next day she was pancreasin' just fine.

As for me, I'm still amazed at how well things went diabetically during my hospital stay:

Not being able to eat anything once we started the medications Monday night helped my Dexcom graph stay steady, as well as the insulin IV drip we had me hooked up to. It also became apparent to me that nursing has a huge impact on blood sugars, as I didn't have to bolus for food the entire time I was in the hospital. (What?!) I've been adjusting my basal rates now that we're home so things are a little more back to what I'm used to, but man, was that nice.

I had planned ahead for the "just in case" option, knowing from Kerri's posts about her daughter's birth story that a Dexcom sensor on my lower body would likely be removed in the case of a c-section. When I checked into the hospital, I had both my Dexcom sensor and my insulin pump site in my left arm. It worked beautifully.

And as for Billy, he seems to have found his calling as a baby alert dog: 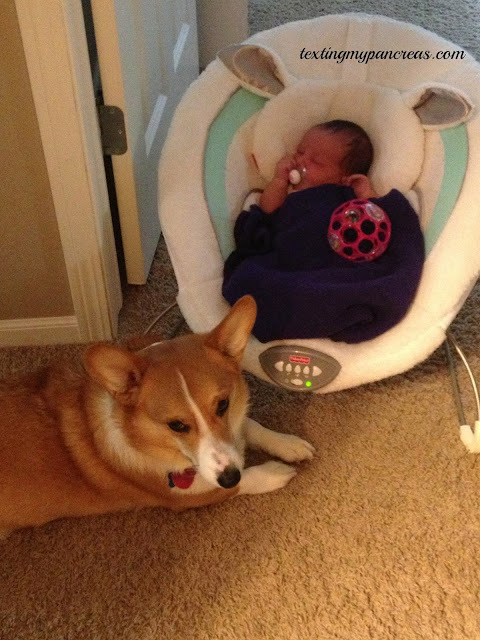 He goes where she goes, comes running when she cries, and sometimes whimpers when her diaper need changing. They share tummy time, and though we are careful to keep him at a bit of a distance (he is a dog, after all), he would love to snuggle up to her if we'd only let him: 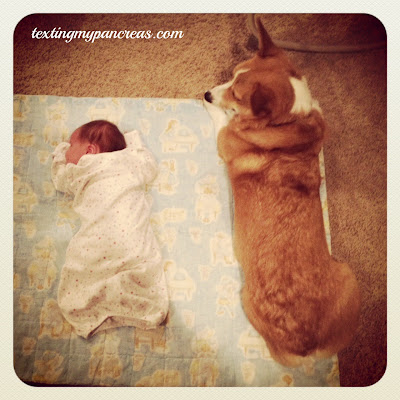 In short: things are pretty great around here.