Every time I have sat down to write a post about the baby bunny's birth story ("I should really get this written down before I start forgetting stuff"), I get distracted by the thought: "....oooor, I could just cuddle with my daughter some more", and guess which option usually wins? 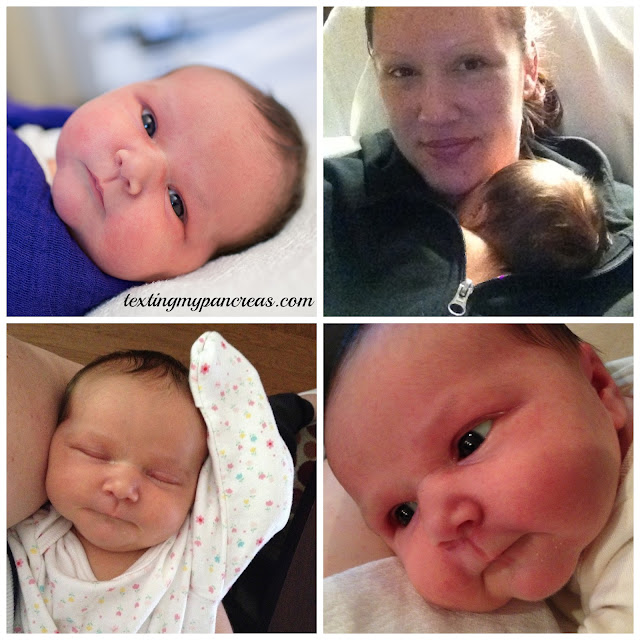 She arrived two weeks ago (about halfway through week 37 of pregnancy) at 9 lbs. 2 oz., 20 inches long, with a full mop of hair and the most kissable cheeks I've ever seen. There were many surprises for me throughout the delivery process, but I like to think that she and I handled it pretty well. After all, she's sleeping in her bassinet right next to me as I type this (and I'm listening to my favorite sounds in the world, which are the contented sighs/hums she often makes while sleeping or eating), and getting her here safely and in good health was the only thing that really mattered. Mission accomplished.

Or "touchdown", if you're so inclined. 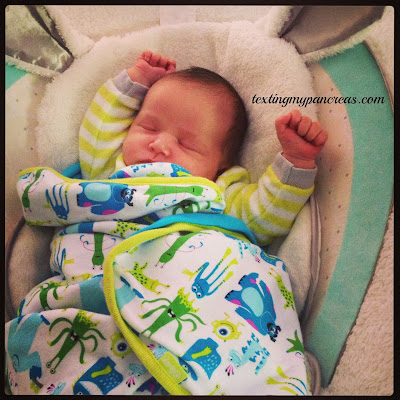 Be warned that there will be a great deal of TMI in these posts, so read at your own risk. I don't feel the need to censor much of the story, as it involves me personally - childbirth really does erase a lot of one's modesty.

Aaron and I visited my doctor's office one last time before delivery in order to have an amniocentesis performed; a procedure recommended by the high-risk OB to determine how developed her lung function was. I laid on the familiar ultrasound bed and with the wand we searched around for a "good pocket" to poke into. Upon finding one, that part of my stomach was injected with a numbing agent and then was stuck with a giant needle that I tried really hard to not look at too closely - all the while watching the little bunny baby on the ultrasound monitor. She did a very good job of staying put during the procedure (too much movement could have resulted in her getting jabbed by the needle, thereby necessitating an immediate delivery - and yes, we had our bags packed and in the car before this appointment, just in case), and we got the amount of amniotic fluid needed to get the testing done.

We were relocated to a monitoring room where I sat in a surprisingly comfortable medical-grade recliner while hooked up to a machine that took note of my contractions and her heartbeat, in addition to recording the baby kicks I was tracking with a button press (indicated on the chart by a musical note) for each movement. We were there for about an hour to make sure that the Rabbit was going to be okay post-procedure, and when we were all confident that she would be, Aaron and I headed home for our last few hours as Free People Who Do Not Have Kids. 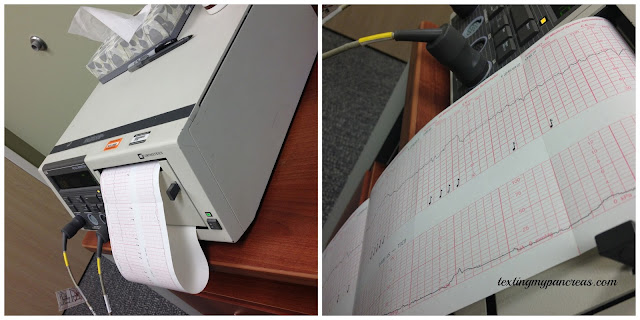 The test results took a few hours to come back, and they showed that her lung development was in the "intermediate" zone. My doctor and I talked through the options, and mutually decided that keeping our plan to begin induction that night made the most sense for our particular circumstances.

And so, at 7:00 pm that Monday night, we checked into the hospital. The only other time I'd been admitted to the hospital was for my diabetes diagnosis 27 years ago, so that was a little weird.

We were shown to our room, and after changing into some glamorous (no) hospital gowns, the labor-inducing circus got underway. Blood was drawn, and two IV lines were put in place for later - one in my left forearm, and one on top of my right hand. The left would be in charge of labor-related medications, while the right would be reserved for my insulin drip once labor began. (I was given the option of keeping my insulin pump on and being in charge of my own diabetes management during labor, and I'm very glad I went the route of the IV insulin drip. Not only did I not have to think or do much about diabetes for several hours, but it also worked beautifully. Proof coming in a future post.) 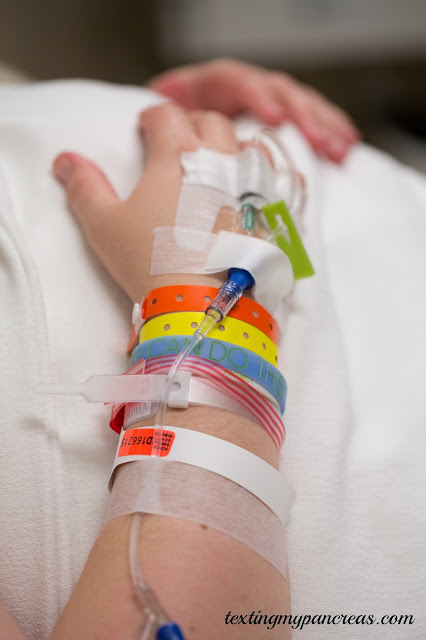 The medication I was given that night and into the morning was to help get my cervix in a baby-expelling state of mind, and other than the very uncomfortable manner in which it was delivered every few hours, that part of the process was pretty uneventful.

That is, until 6:15 am the next morning, when surprise! My water broke. (We hadn't begun the actual labor meds yet, so this was taken as a good sign that my body was ready to do this.) You know how in movies it's this huge gush of water, and then everyone tells you that in real life, it's not like that at all?

It was exactly like that. Perhaps the most embarrassing part was that I couldn't tell if I was peeing or bleeding or what the hell was going on, so my reaction was something like, "Oh. OH. Aaron! Something is happening! Something is definitely happening...", while I simultaneously pounded the "someone please come help me right effing now" button on the side of my bed.

Stuff began to get real pretty quickly. A catheter was inserted (yay, no more wheeling IV bags with me to the toilet!), and doses of pitocin began coming my way via IV. Labor contractions began as small, intermittent discomforts, eventually snowballing into horrific pain on a 90-second continuous loop. I remember thinking, wow, people are not exaggerating one bit when they talk about how painful labor is. I would have gladly signed over my house for even a small dose of something to quell the pain.

Somewhere around 11:00 am, the anesthesiologist/angel appeared and after a few minutes, we had an epidural set up in my back. I can tell you that I have never felt such grateful relief in all my life. Holy hell, what a difference. The epidural allowed me to tolerate (read: mostly not feel) the increasingly intense contractions, and for the next few hours I was even able to take some short naps (!). Everything was progressing as my medical team hoped it would.

It was, that is, until around 3:00 pm. Progress in terms of dilation began to stall, and baby Rabbit wasn't giving any indications that she was ready to budge (meaning, she hadn't "dropped" any lower). In addition, the fetal monitors were indicating that with each growing contraction, her heart rate was dropping.

And so, at 3:17 pm, my OB came into our room to tell us what the new plan was. "She was tolerating labor just fine up until now, but we don't want to take any chances so we'll be doing a c-section. Aaron, here are some scrubs for you to put over your clothes. Kim, we're going to wheel you into the operating room now and Aaron will join you in about ten minutes."

Aaron started sending the "get here now!" texts to family, and I was given the numb-the-bottom-half-of-your-body drugs, while my hair was shoved into one of those meshy shower caps. I began to feel tingles, then the strange feeling of dead weight throughout my legs, hips, stomach, and eventually even out to my arms and hands. I also began to accept that, once again, I really had no control in how this all would play out.

My doctor looked from me to Aaron, then back again. She smiled.

"You're going to have a baby within the hour."

And all I could think was: 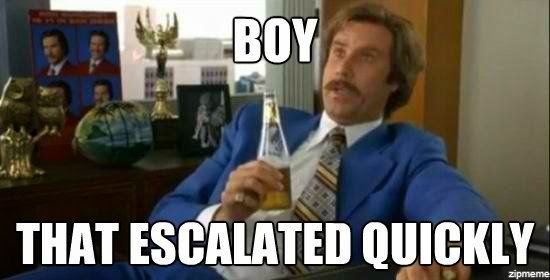 (To continue to Part Two, click here.)
Posted by Kim